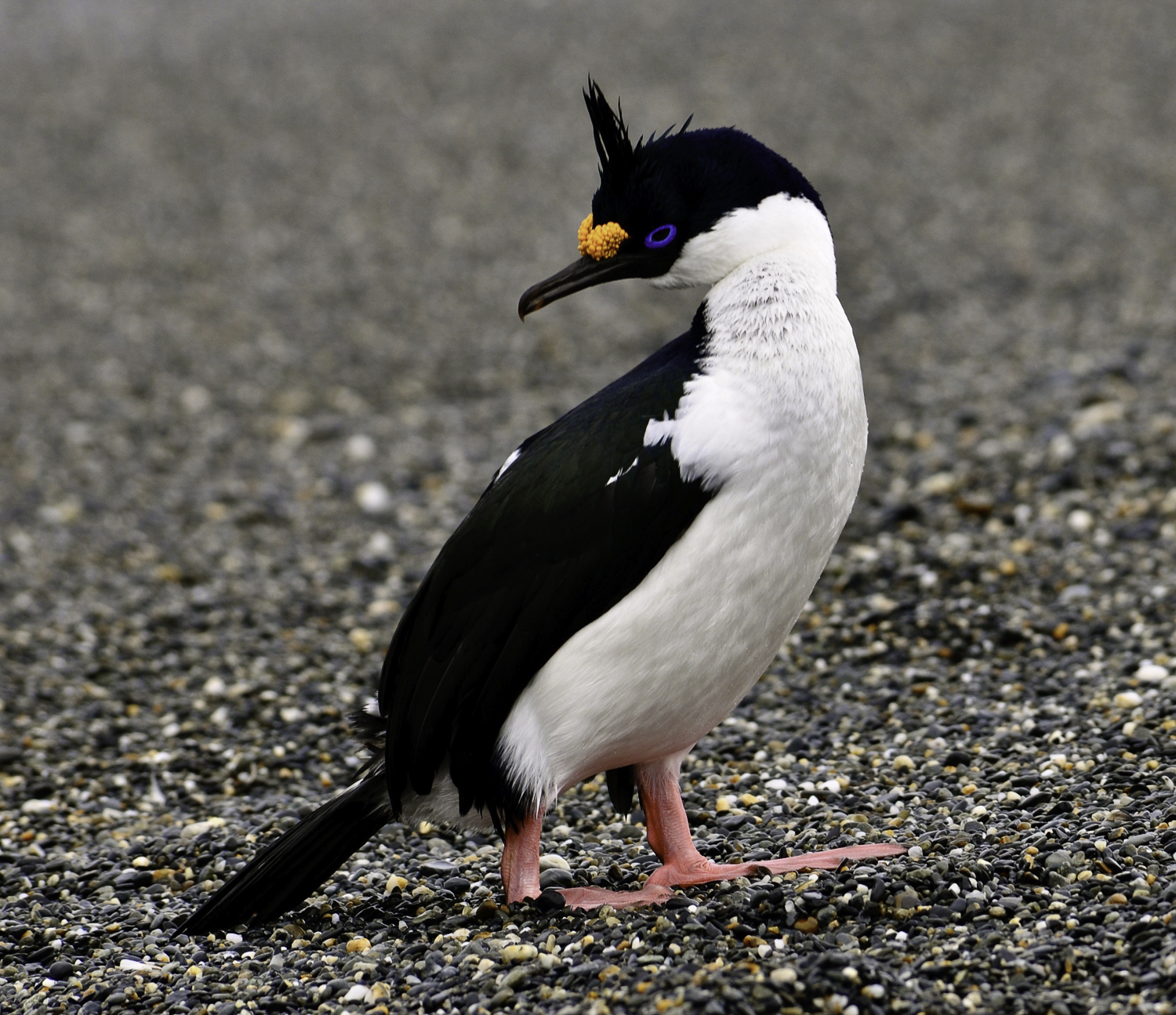 Cormorants, sometimes referred to as “sea ravens” or “shags” colloquially, are fish-eating waterbirds belonging to the order Pelecaniformes and are in the genus Phalacrocorax, which includes about 40 species worldwide. The cormorant species name comes from the Greek words phalakros meaning “bald” and korax meaning “raven.” Cormorants have relatively short wings for a flying seabird and large webbed feet because they hunt for their food mostly by diving and swimming in relatively shallow water. Watching them speeding along underwater propelled by those webbed feet and using their wings as rudders is an amazing experience. Like most waterbirds, cormorants have glands that secrete a preen oil used in keeping their feathers waterproof (photo #5). In the case of cormorants, however, this gland appears to provide only short-duration waterproofing and they are often seen with their wings fully outstretched to dry after a fishing expedition.

The imperial cormorant is one of the most elegant and easiest of all cormorant species to identify, with glossy black feathers covering its back and wings, a distinctive white belly and neck, a recurved head crest, sapphire-blue skin around it eyes, a saffron-yellow nasal caruncle, and startling pink legs and webbed feet. Imperial cormorants are found on the coasts of southern Chile and Argentina, on the Antarctic Peninsula, and on many islands in the Southern Hemisphere, including the Falklands/Malvinas, South Georgia, Heard Island and Macquarie Island. In Argentina, its distribution extends from Tierra del Fuego (Ushuaia) north to Punta León (Chubut). In Chile it breeds from Diego Ramirez Islands north to Santa María Island. Most breeding occurs in small colonies along coastal edges, on cliff ledges, rocky islets, and on flat-topped sea stacks offshore. Preferred roosting sites include sandy and boulder-strewn beaches. During the breeding season, imperial cormorants forage by day within 15 miles of their nest site, but may range up to 30 miles in search of food when necessary.

The diet of imperial cormorants focuses primarily on fish, but they will also eat crustaceans, cephalopods (squid) and polychaete (marine worms). Along the Patagonian coasts the principal fish species taken are the Argentine hake, the Argentinean anchovy, ciclid fish and the banded cusk eel. Some colonies of cormorants have been observed “herding” schooling fish for more efficient hunting. Scientists in Argentina recently attached a lipstick-sized video camera to an imperial cormorant’s back. The results were surprising because the video footage showed “Superbird” diving 150 feet to the seafloor to catch a fish—far deeper than researchers thought cormorants could plunge-dive in pursuit of prey. “The assumption was that they fed on the surface, or just below the surface,” said WCS biologist Martin Mendez, spokesperson for the project, which was led by CONICET biologist Flavio Quintana. “This is the first time we have seen them diving to the seafloor. It’s a new behavior—people didn’t know about this before.

The breeding season begins with male advertisement displays at or near the nest site, which include a dramatic throwback of the head with the bill open and a loud “gargling” call. Pair-bonding displays between mated birds include gaping, head lowering, throat-clicking and mutual preening. Nesting materials include marine algae, feathers, sticks and shells and cemented guano. Adults start to occupy the nest in September. Egg laying occurs from October to late November, with the peak egg-laying period becoming progressively later at higher latitudes. In years with challenging environmental conditions, brood reduction is common and typically involves the last-laid egg being removed from the nest. A pair will typically lay 3 eggs and rear 1 to 2 young. Chicks fledge at 3 months.

Current imperial cormorant populations are considered relatively stable, Commercial fishing activities take a high toll, especially when cormorants become entangled in fishing nets. Other threats include oil spills and the disturbances to cormorant roosting areas and breeding colonies associated with guano collection activities for agricultural uses. Natural predators include kelp gulls, dolphin gulls, snowy sheathbills, skuas, and giant petrels, which take unguarded cormorant eggs and chicks. In mainland areas of Argentina and Chile, the primary mammalian predators include the puma, red fox, gray fox, Patagonian ferret, the Geoffroy’s cat, and hairy armadillo. As is true for all seabirds that rely on the ocean for food, the ongoing impacts to global ocean health resulting from climate change remain dark clouds on the horizon. 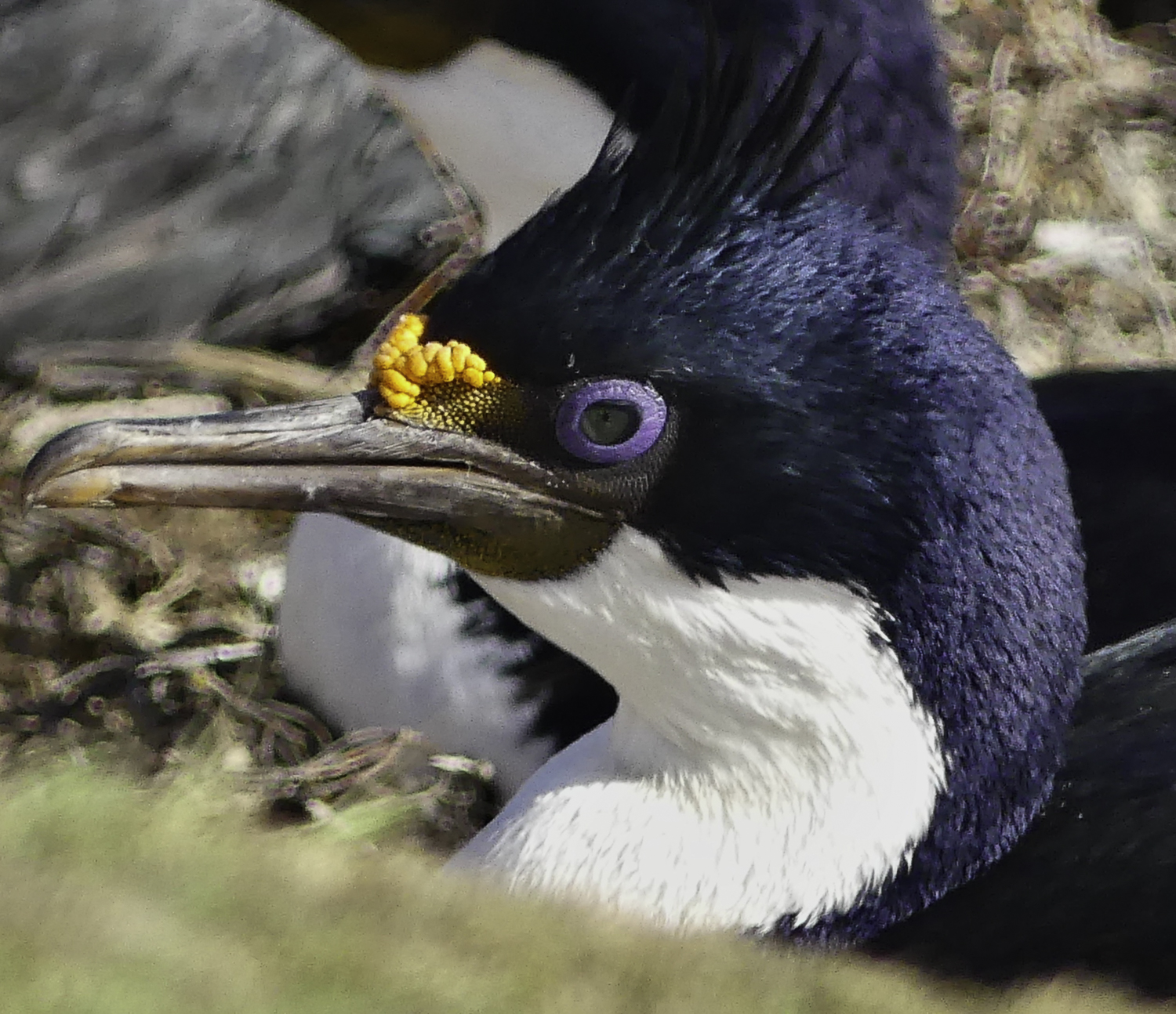 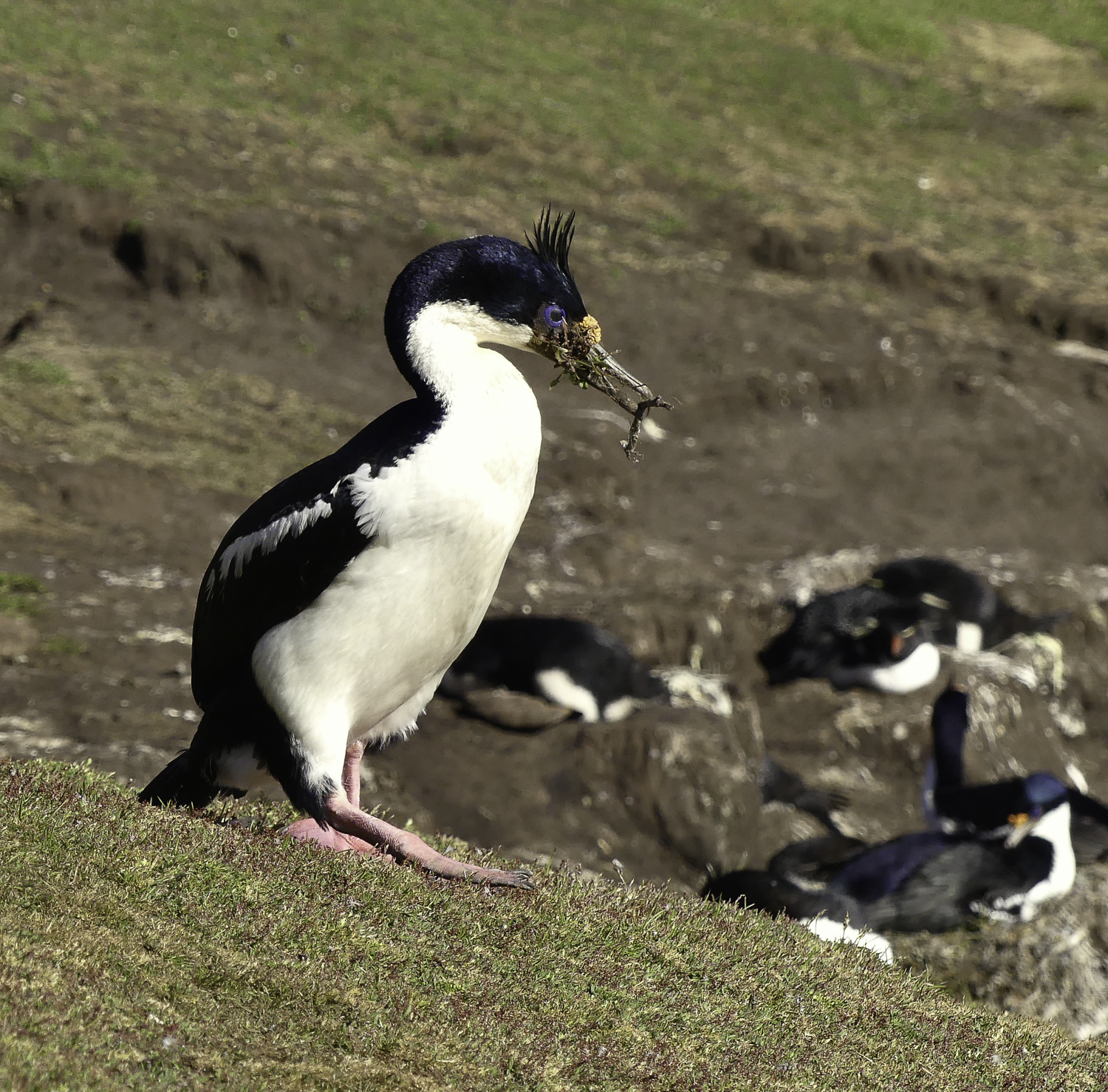 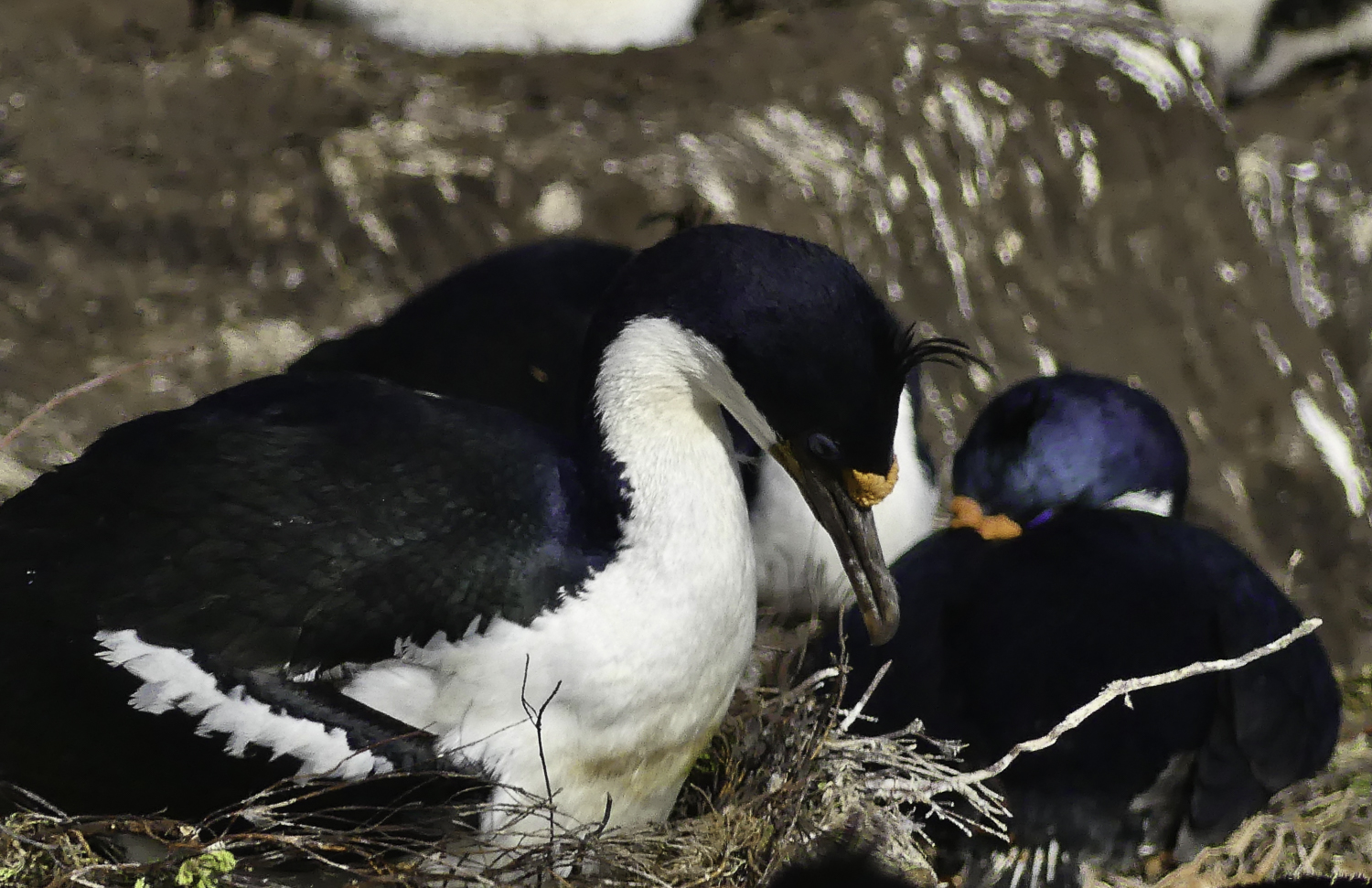 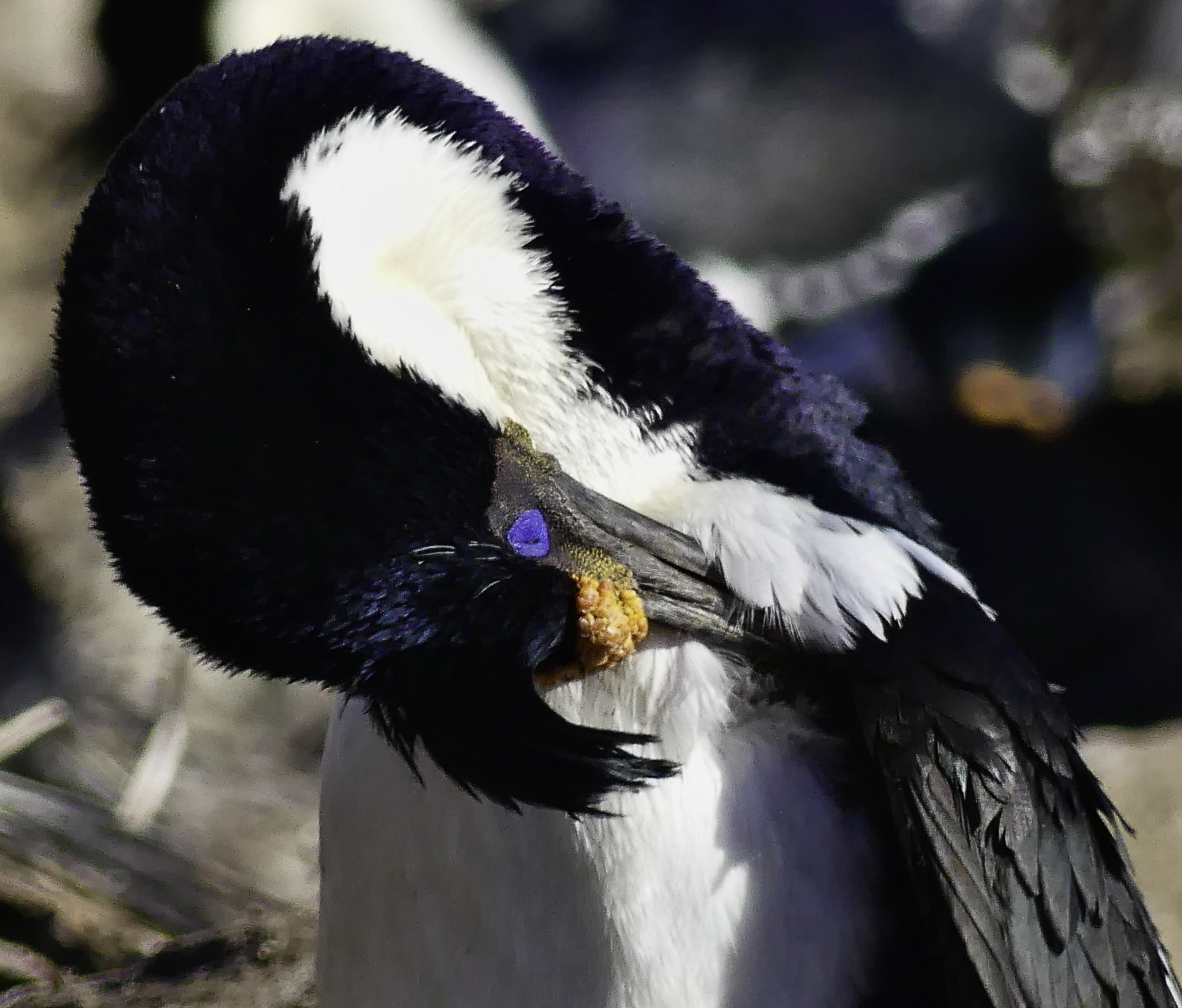