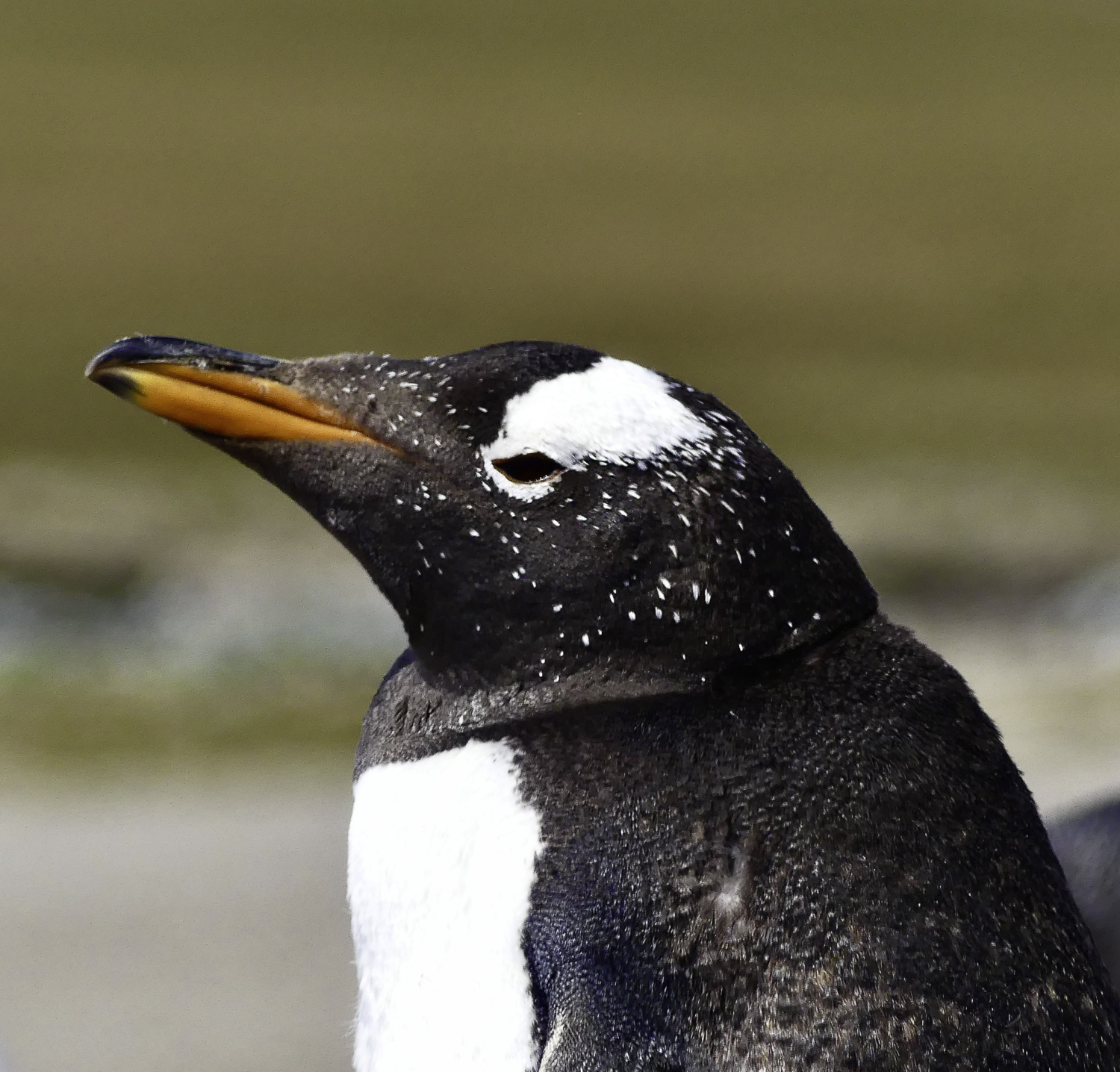 Admittedly, I have a soft spot for gentoo penguins! Maybe it is the patch of “snow” and the sprinkling of “snowflakes” on their heads, their stoic demeanor in the presence of skulking Johnny rooks or vultures, or their stone fetish, but I find them to be utterly charismatic. Current gentoo population estimates range between 400,000-600,000 breeding pairs, with principal breeding colonies on the Antarctic Peninsula, and the islands of the Falklands, South Georgia, Kerguelen, Heard, South Orkney, Macquarie, Crozet, Prince Edward and South Sandwich. There are also two tiny colonies of less than 100 pairs in South America, one on Isla de los Estados (Staten Island) and the other on Isla Martillo (Hammer Island). The gentoo penguin is one of three species in the genus Pygoscelis. Mitochondrial nuclear DNA evidence suggests the genus split from other penguins around 38 million years ago, about 2 million years after the ancestors of the genus Apenodytes. In turn, the Adelie penguins split off from the other members of the genus around 19 million years ago, and the chinstrap and gentoo finally diverged around 14 million years ago.

Gentoos reach a height of up to 35 in, which makes them the third-largest species of penguin after the emperor and the king penguins. Like all penguins, gentoos appear a bit awkward on land, but are the epitome of grace underwater. Their streamlined bodies and strong, paddle-shaped flippers propel them up to 22 mph, faster than any other diving bird in the world. Adults typically spend much of the day foraging at sea, usually close to shore, but occasionally ranging as far as 16 miles out. When pursuing prey, which in the Falklands includes roughly equal portions of fish, squid, and krill, they can remain below for up to seven minutes and may dive several hundred times a day (maximum depth 655 feet)  to find enough food to sustain a brood of chicks. The gentoo’s diet is high in salt because they eat organisms with the same salinity as sea water, which can lead to physiological complications associated with toxic levels of sodium, especially for gentoo chicks. To counteract this, gentoos have a highly developed salt gland located above their eyes that removes the excess sodium from their blood, transforming it into a concentrated saline solution that can be expelled along channels in their beak.

Gentoos are monogamous breeders, and infidelity may warrant banishment from the colony. Nests are usually made from a roughly circular pile of stones and can be quite large. The “stone fetish” is a serious matter and the stones are jealously guarded and their ownership can be the subject of noisy disputes and physical attacks between individuals. They are also prized by the females, even to the point that a male penguin can obtain the favors of a female by offering her a choice stone. The male gentoo in photo #3 is certainly not going to let a pair of vultures distract him from the mission at hand. Breeding pairs typically lay 1-2 eggs, and both parents share incubation, changing duty daily. The eggs hatch after 34 to 36 days. The chicks remain in the nests for about a month before joining other chicks in the colony and forming crèches. The chicks molt into subadult plumage and go out to sea at around 80 to 100 days.

Leopard seals, sea lions and killer whales are all predators of the gentoo. On land healthy adults have no natural predators, but skuas, gulls and birds of prey, such as caracaras, will steal eggs and small chicks if they get the opportunity. Chicks are also at risk from fluctuations in food supply and weather. Downy plumage provides good insulation when dry, but if it becomes saturated by prolonged rain, chicks can die from hypothermia. By contrast in periods of very hot weather, chicks become too hot, and may die from heat stress. Toxic algal blooms also threaten gentoo populations because they poison many of the species that penguins rely on for food. A toxic bloom caused a major mortality event in 2002, and it has taken years for the species to recover. Gentoo penguins face increasing threats from climate change and human activities such as commercial fishing (bycatch), pollution, tourism, and marine traffic. Oil spills occasionally poison local populations, and unfortunately the Falkland Islands are currently being evaluated by oil companies as a potential area to drill in the future. 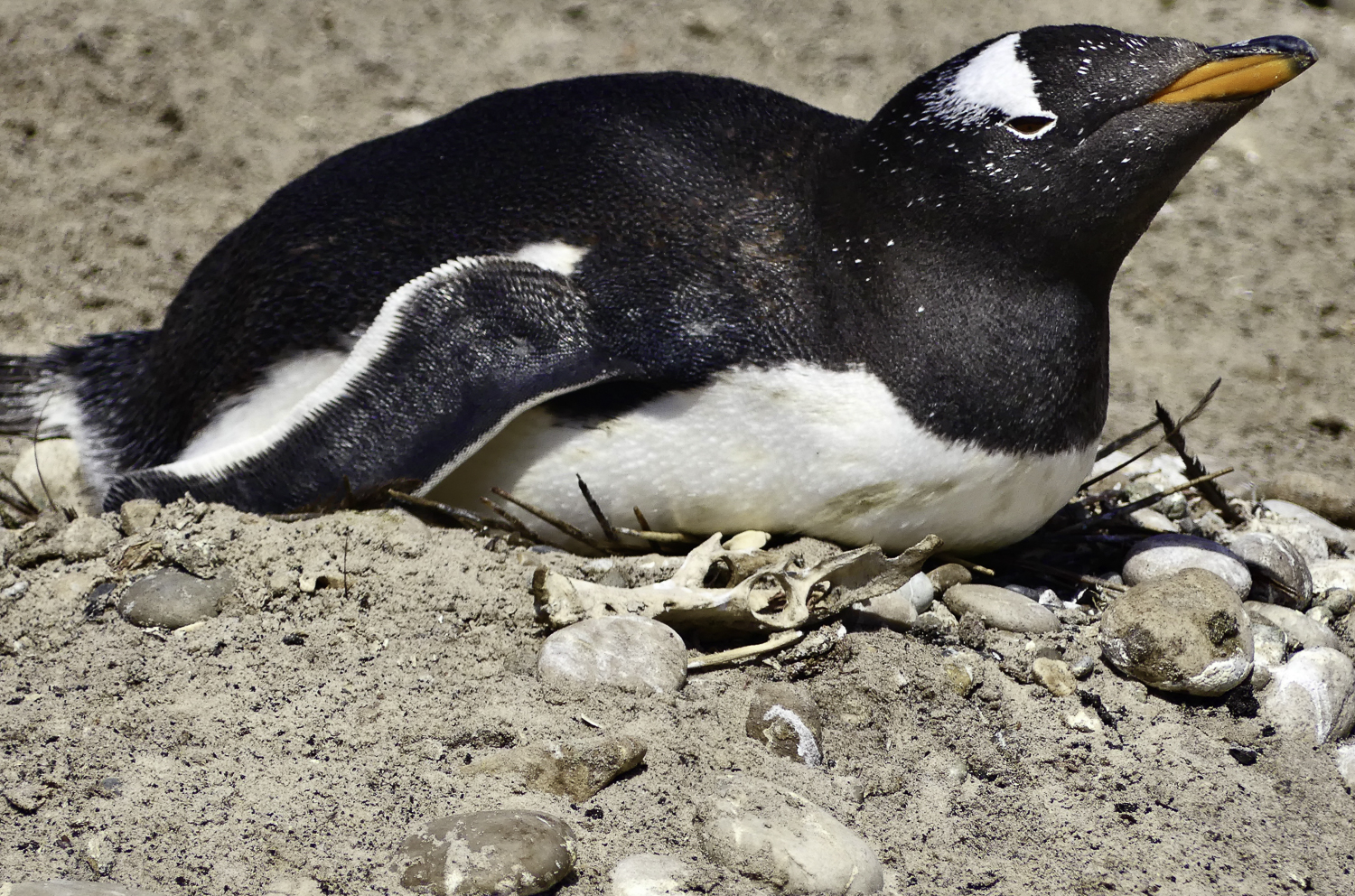 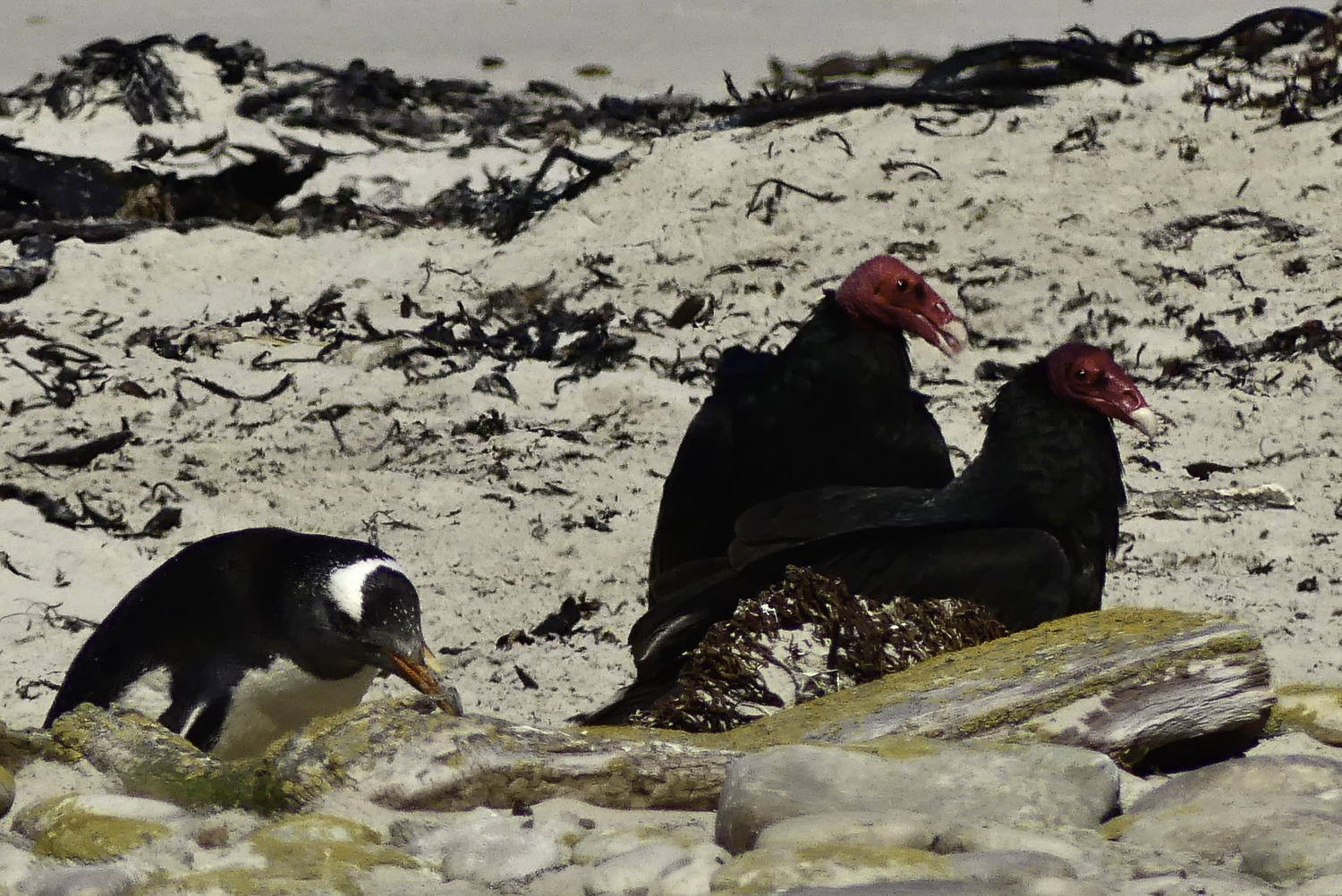 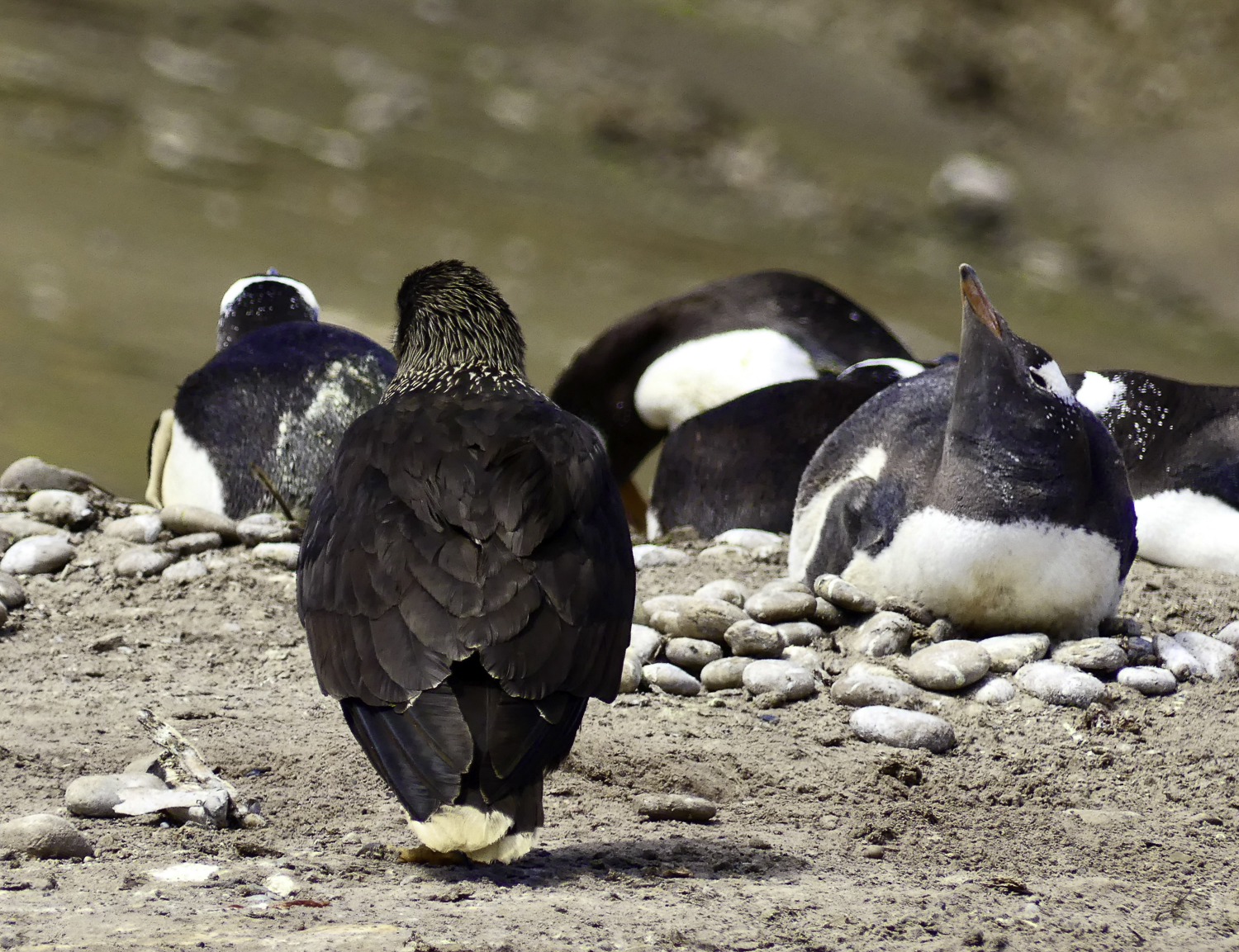 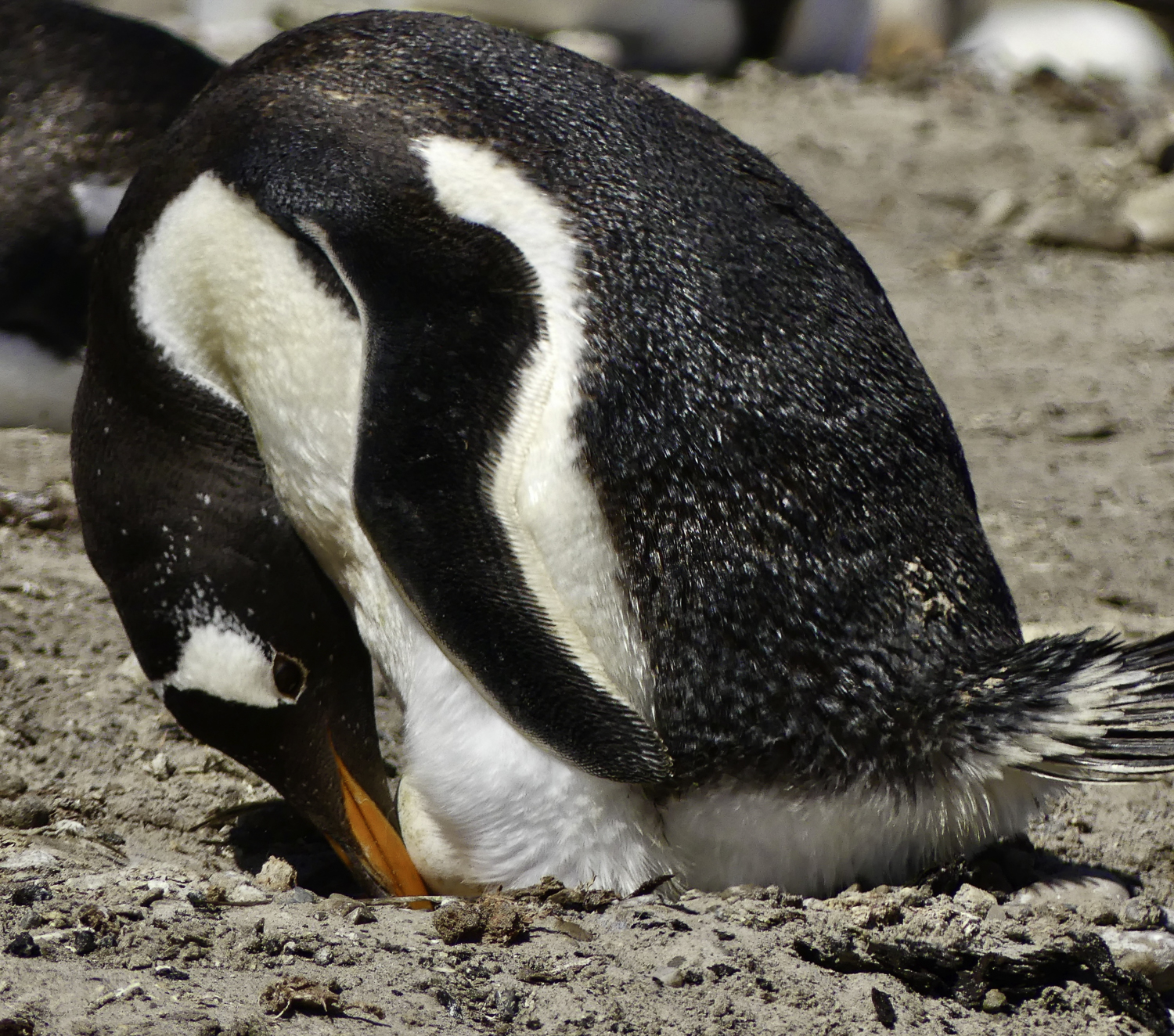 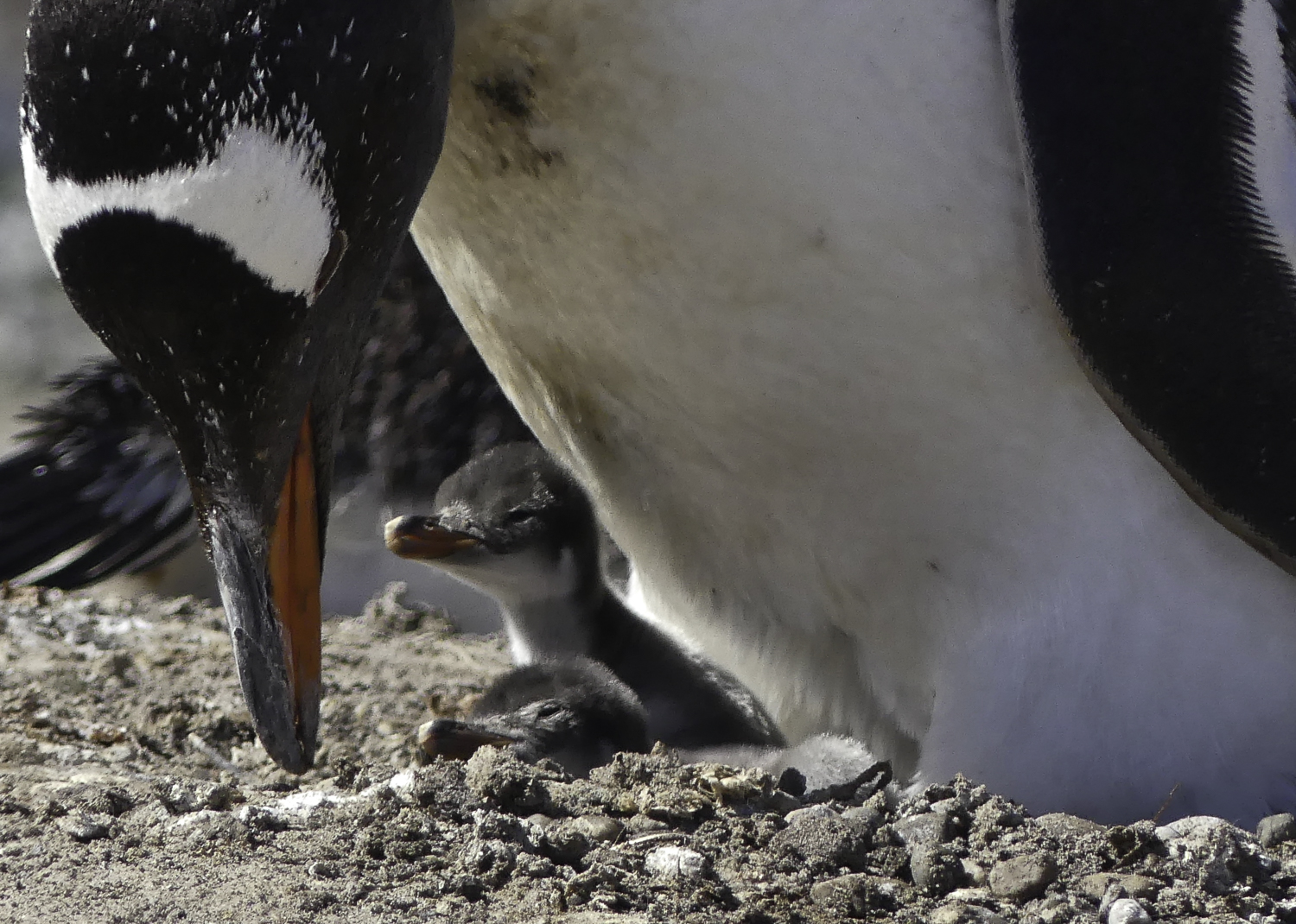 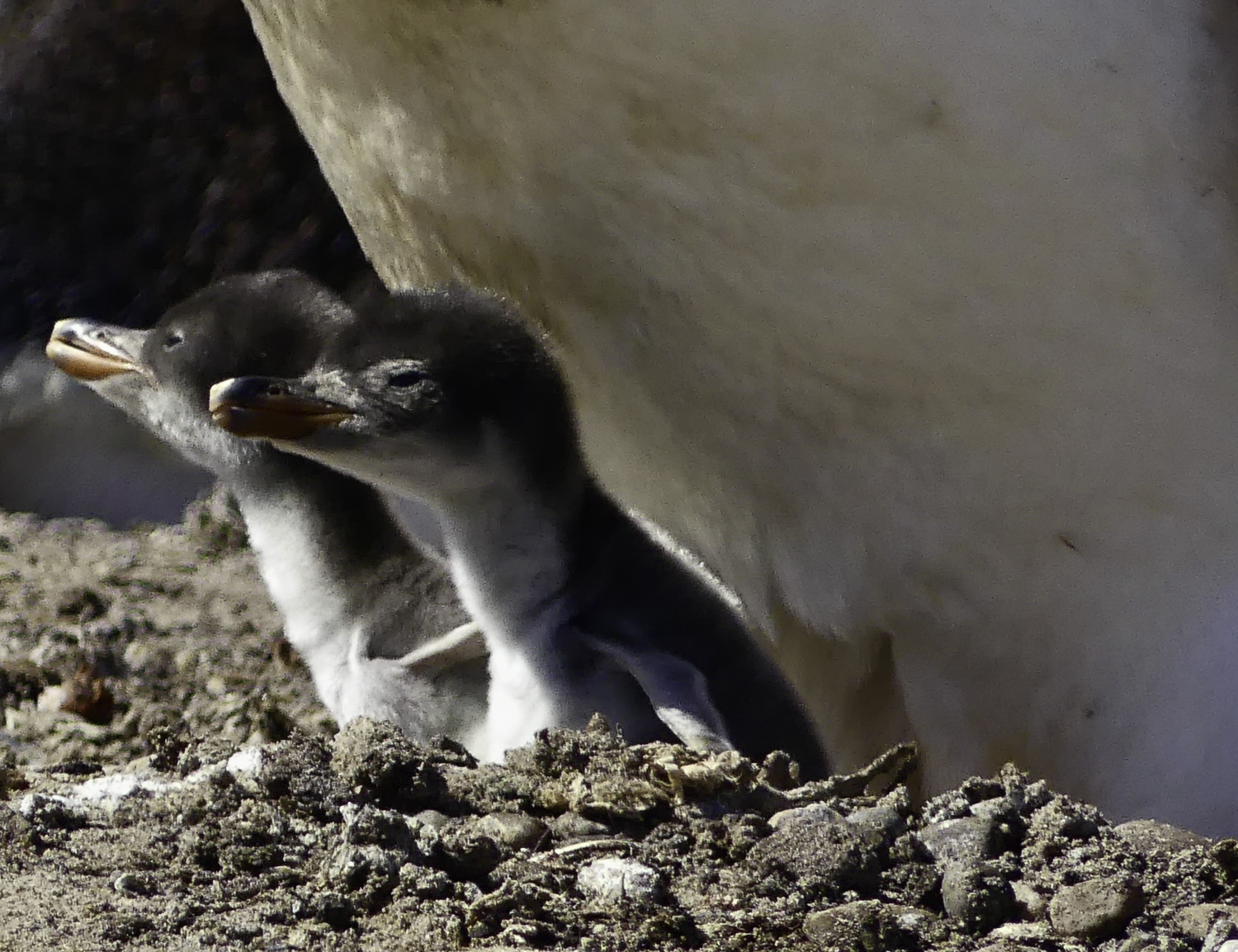