ePostcard #92: The Age of Discovery 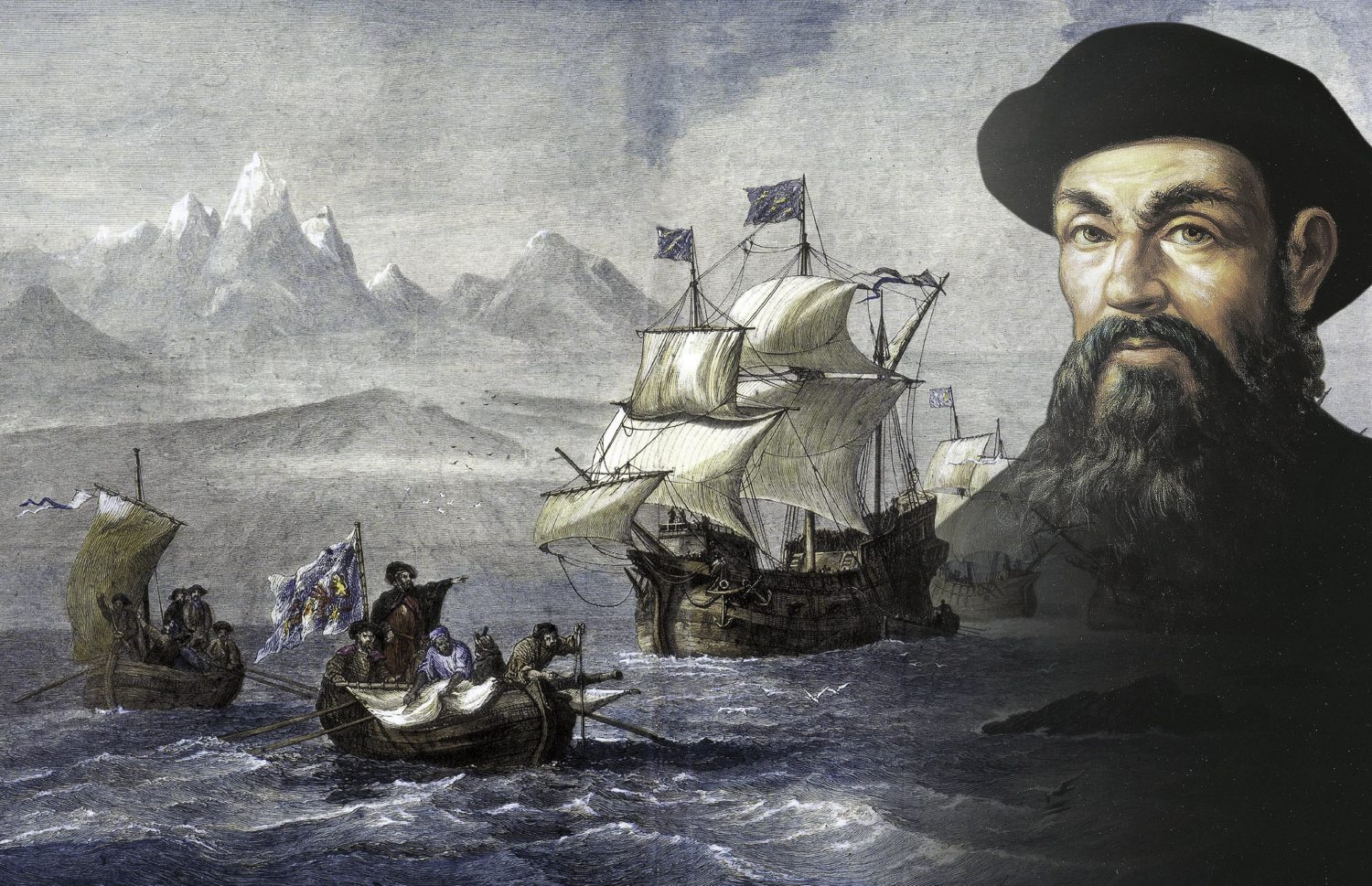 ePostcard #92: The Age of Discovery

Modern exploration had to be an adventure of the mind, a thrust of someone’s imagination,
before it became a worldwide adventure of seafaring….The pioneer explorer was one lonely man thinking.
—Daniel Boorstin, The Discoverers

In reading just a sampling of the wealth of literature on the Age of Discovery (1450-1600), the ocean voyages that circumnavigated the globe, the assertion that the discovery of the New World was the most significant event in Western history is a constant refrain. In truth, it is difficult to imagine any suitable modern metaphor to describe the shock that people must have experienced when they realized that the world was neither as flat or as “small” as they had perceived it to be. Some modern writers have compared it to what we might feel if scientists discovered life on Mars.

On reading historian Frederick Turner’s book Beyond Geography, which addresses the far-reaching global impacts of European conquest, I kept coming back to this one sentence: “A world millions of years in the making vanished into the voracious, insatiable maw of an alien Civilization.” For many of us with European ancestry, that “alien Civilization” included our forebears and it began in earnest with the Age of Discovery. Even as we admire the feats of bravery and the extraordinary maritime and navigation skills of these early explorers, and we should, we must also acknowledge that the Age of Discovery profoundly changed a world “millions of years in the making.” The oft-used phrase, “God, Gold, and Glory,” speaks directly to the greed, inhumanity, and zeal for religious conversion that typified the age. The expedition stories of this age are heroic and tragic in equal measure, and casting a more noble and Eurocentric spin to what was actually an age of ruthless imperialism is not my intent. In many ways, these voyages of discovery not only explored the ends of the earth, they also penetrated the darkest recesses of the human soul.

I use historian Daniel Boorstin’s “Age of Discovery,” rather than the more familiar “Age of Exploration,” because the primary objective of these voyages was to expand geographic knowledge of the unknown world and empower the most ambitious European nations—particularly Portugal and Spain at the outset—to found overseas empires and fill their coffers with wealth from plunder, exploitation, and trade. Obtaining Asian spices, silk and other luxury goods was the epicenter of the European economy in the 15th and 16th centuries, much like oil is today. Beginning in the early 15th century, an aggressive campaign of European expansion and colonization swept across the Atlantic, staking claim to new territories, conquering the indigenous peoples that resisted the invaders, and opening up advantageous trade routes.

In 1418, the Portuguese began systematically exploring the Atlantic coast of Africa, under the sponsorship of Infante Dom Henrique (Prince Henry). Under the direction of Henry the Navigator, the Portuguese developed a new, much lighter ship, the caravel, which could sail farther and faster, and, above all, was highly maneuverable and could sail into the wind. In 1492, threatened by the Portuguese monopoly on the African slave trade and ongoing maritime expansionism, the Catholic Monarchs of Castile and Aragon (Spain) funded Christopher Columbus’ plan to sail west to reach the Indies by crossing the Atlantic.  Although he didn’t realize it at the time, Columbus discovered an uncharted continent, which would later be called America after the explorer Américo Vespúcio—a “new world.” To prevent conflict between Portugal and Spain, the Treaty of Tordesillas was signed, dividing the world into two regions of exploration, where each had exclusive rights to claim newly discovered lands. Following the signing, the competition between the two nations only intensified and was soon cloaked in intrigue, secrecy, sabotage and murder.

In 1498, a Portuguese expedition commanded by Vasco da Gama reached India by sailing around Africa, opening up direct trade with Asia. In 1513, Spaniard Vasco Núñez de Balboa crossed the Isthmus of Panama and reached the “other sea” from the New World. East and west exploration overlapped in 1522, when the Spanish expedition, led by Portuguese navigator Ferdinand Magellan and later by Spanish Basque navigator Juan Sebastián Elcano, sailing westward, completed the first circumnavigation of the world. In the wake of Magellan, Spanish conquistadors soon shifted their focus to the interior of the Americas, and later, some of the South Pacific islands. The French, the English and the Dutch entered the race of exploration soon after learning of these exploits, defying the Iberian monopoly on maritime trade by searching for new routes, first to the western coasts of North and South America, and then spreading throughout the Pacific Ocean. French explorers following in the wake of the Portuguese around Africa into the Indian Ocean, discovered Australia in 1606, New Zealand in 1642, and Hawaii in 1778. Meanwhile, from the 1580s to the 1640s, Russians explored and conquered almost the whole of Siberia, and Alaska in the 1730s.

The Portuguese and other Europeans oversaw the forced removal of millions of west Africans, and their dispatch to the mines and fields of the Americas – men and women whose blood, sweat and lives contributed to the enrichment of European empires. The conquest and settlement of the Americas, which also included the widespread exploitation and cultural genocide of indigenous peoples, remains a key turning point in the ascendancy of European economic and imperial power. The oft-used phrase, “Gold, Glory and God,” speaks directly to the greed and inhumanity that typified the age. Tragically, the Age of Discovery set the stage for many of the social and environmental challenges that we face throughout the world today.

1. This wondrous painting (artist unknown; open source) captures Magellan’s spirit and his expedition’s amazement as they realize that they have discovered and navigated the strait, the paso, linking the Atlantic with the Pacific.

3. Spanish and Dutch galleons engage in battle on the open seas. Photo #3 is “A Naval Encounter Between Dutch and Spanish Warships” by Cornelius Verbeeck, ~1619. Galleons were multi-decked ships that came later than the caravel and carrack. They were faster, more stable, and more maneuverable than other ships.

4. Mariners used two primary methods of navigation during the Age of Discovery: Celestial Navigation and Dead Reckoning. Celestial Navigation is a method of determining location on the open water. Explorers used celestial angle measuring instruments to find their latitude. Finding longitude was still out of reach during this time period. (#4 archival map, Planisphærium Cœleste, by Frederik de Wit, 17th Century). Instruments such as the cross-staff, quadrant, and mariner’s astrolabe were used to measure the angle between celestial bodies and the horizon, which revealed latitude. These instruments later developed into the back-staff, octant and sextant. Photo #5 Astrolabe from Jean Fusoris’ shop in Paris, ~1400 Photograph by Sage Ross, http://creativecommons.org/licenses/by-sa/4.0/. Right, A Jacob’s Staff (cross-staff) from John Seller’s book “Practical Navigation”, 1672.

5. Dead Reckoning is calculating one’s current position by leveraging a known starting point. Mariners needed their compass heading, the ship’s speed, and the time spent traveling at each speed. The mariner’s compass shows direction. Chip logs were used to estimate speed. A chip log is a wooden board attached to a line with knots at uniform intervals. Sailors would drop it overboard and count the knots as the line spooled out. Nautical miles per hour are still measured in “knots”. 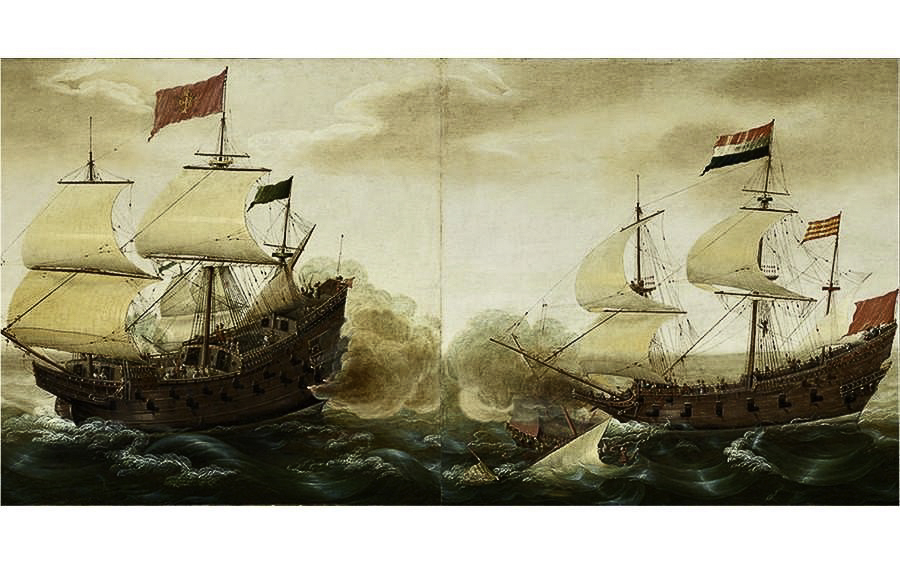 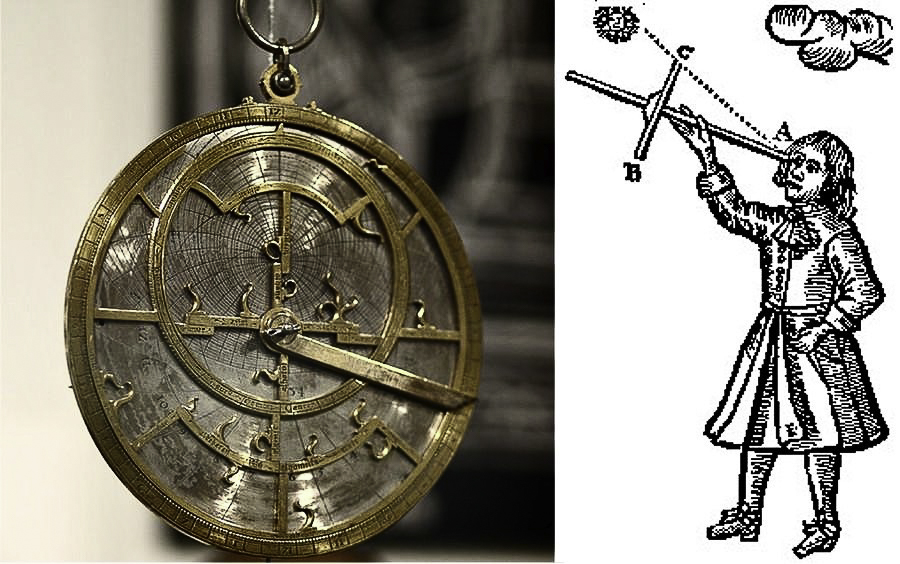 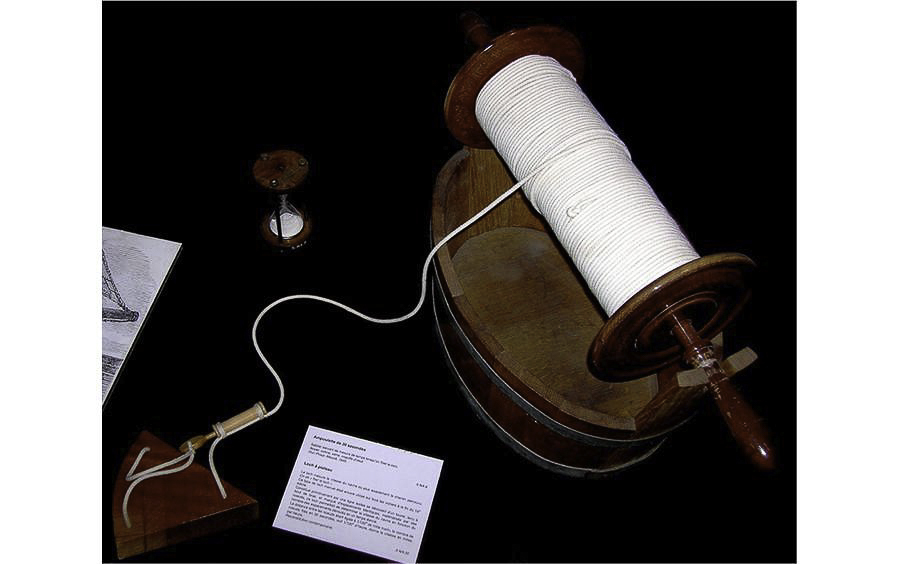