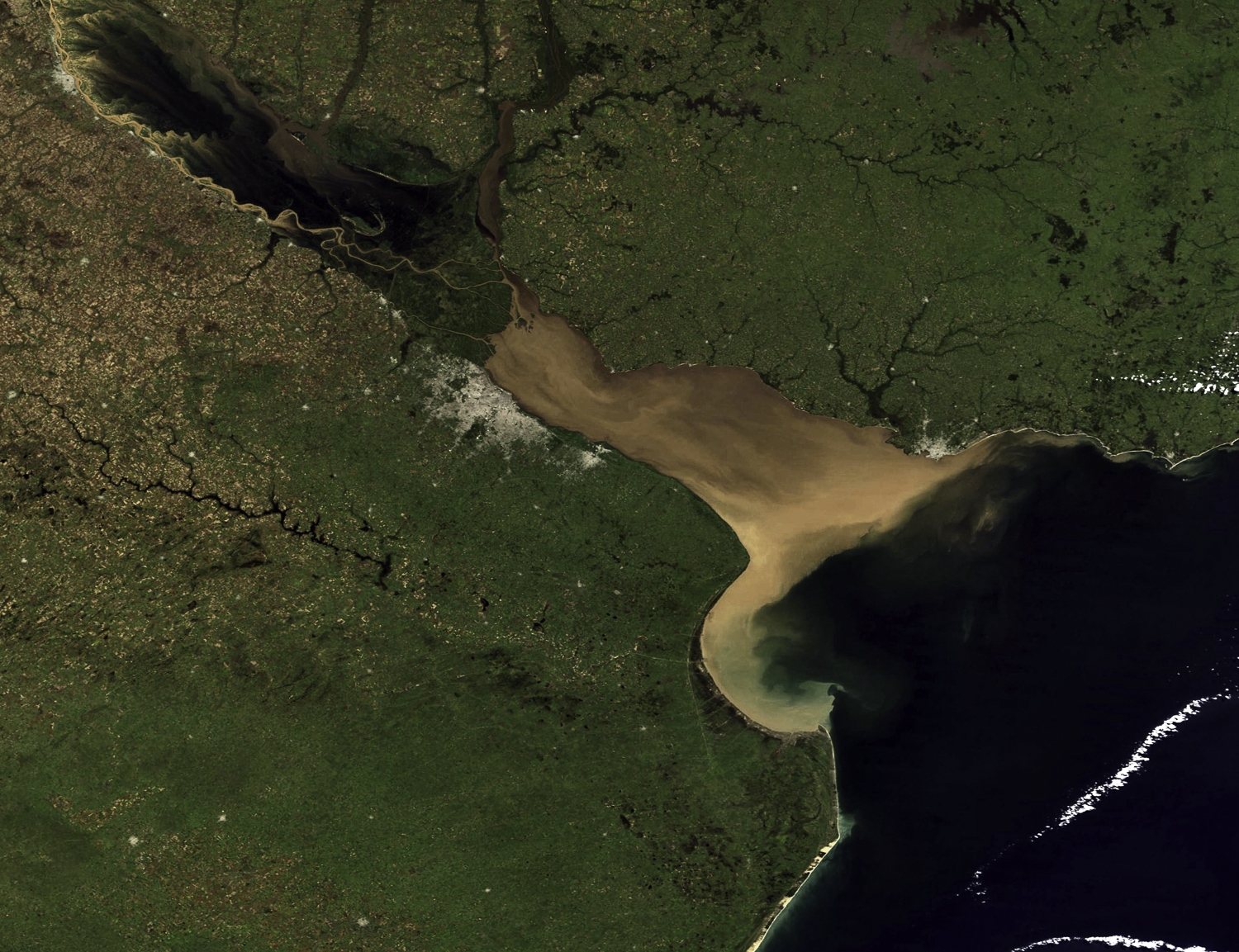 Magellan wasn’t bluffing when he told Spain’s King Charles that he absolutely knew where to find the strait. Although his plans were veiled in the competitive secrecy of the age, Magellan had a specific place in mind along the South American coast—we know it as the Río de la Plata. When I first saw this vast river from an airplane window on approach to Buenos Aires, I thought I was seeing the open ocean. This NASA satellite photograph (#1) of the Río de la Plata gives us a unique sense of its scale, with the city of Buenos Aires appearing as a gray “splotch” near the center and the city of Montevideo (Uruguay) located on the silt-laden river’s north side (near the mouth). It is easy to understand how Magellan and other early explorers might have guessed that this broad waterway was a strait —or even the bottom of South America.

The Río de la Plata was first discovered in 1516 by the Spanish navigator, Juan Díaz de Solís, as he searched for a passage between the Atlantic and the Pacific Oceans. He called it Mar Dulce, or “freshwater sea”, because of its size and low salinity. He never got to explore it because he and five of his men were immediately killed by a large group of Guaráni warriors when they attempted a shore landing. The lore surrounding this expedition claimed that the Spaniards were not just killed, they were roasted and devoured in full view of their horrified but helpless crew members aboard the ship. Magellan would have certainly been aware of this disastrous expedition and some historians believe he might have questioned crew members. An acquaintance of Magellan’s, the enigmatic John of Lisbon, reached the Río de la Plata a couple years after Solís, confirming its existence, but chose not to explore it. In Magellan’s mind, the waterway they described was too large to be anything but a strait.

We rejoin Magellan’s expedition again after the relative tranquility of the fleet’s layover in Rio de Janeiro, as the Armada de Molucca continues its voyage south along the Brazilian coast. In early January, the fleet rounded a headland and sailed across the calm waters of a huge embayment along Brazil’s coastline—Paranaguá Bay. Although tempted to explore the bay, Magellan kept the fleet moving south, noting in his log that the bay would provide future mariners with ample storm protection. On January 10, a fierce storm engulfed the fleet and Magellan decides to reverse course and head back north, to Paranaguá Bay. He soon realized that the erratic winds had blown the fleet due west of their set course. All five ships were now perilously close to the coast and in dangerously shallow water. A vast muddy sea extended as far as the eye could see in a west-by-southwest direction. With the storm still raging, Magellan had no choice but to lead the fleet forward, taking frequent soundings to avoid grounding the ships. He deduced, correctly, that these strange waters must be the infamous Mar Dulce discovered in 1516 by Juan Díaz de Solís. Incredibly, it had taken being blown off course to find it, but Magellan was certain that this must be the strait. Given the ever-present mutinous undercurrents, and despite expressions of renewed optimism from the other four captains, Magellan balanced his certainty with skepticism in front of the men.

During the fleet’s two week reconnaissance, the men explored in their longboats and often saw Guaránis (the region’s indigenous people) observing them from a distance, but experienced no threatening interactions. When the men encountered them while taking on water or catching fish to replenish their provisions, they assumed an armed and aggressive stance and the Guaráni simply ran away. One night, a large canoe left the shore and approached the Trinidad. As the canoe came along side the ship, a man standing upright in the vessel and covered with animal skins, most likely a chief, indicated that he wished to come aboard. Magellan agreed and offered the seemingly fearless visitor a couple small gifts. He then showed the chief a piece of metal, curious to see if these Guaráni possessed metal and would want to barter food and scouting assistance for more useful metal objects. Recognizing the object, the chief indicated that they already had a source of metal and had no interest in bartering, making a signal that he wished to leave the ship. Baffled by the strange encounter, Magellan and his men watched as the Guaráni chief paddled away, never to be seen again.

Unwilling to commit the entire fleet to exploring Mar Dulce, Magellan decided to use the Santiago, the smallest ship, and the one with the shallowest draft, to explore the estuary’s seductive upstream reaches. At no point was the river deeper than three fathoms, much too shallow for the larger ships, and too shallow to suggest that this was an ocean strait that would take them to the Indies. In Magellan’s view, they had found nothing but a large tidal river and there was no point in continuing the reconnaissance. By the end of January, despite the other captains holding fast to their belief that the Río de la Plata would lead them to the Indies, Magellan was determined to continue south and resume the search for the strait.

For Ferdinand Magellan, failure was not an option and his judgement was wise. The river’s modern name—Río de la Plata—originated with explorer Sebastian Cabot, who made a detailed study of the river and its tributaries in the late 1520s. The river gathers its water from the rivers that flow down from the highlands of Brazil, Paraguay, and Northern Argentina. It begins at the confluence of the Uruguay and Paraná rivers at Punta Gorda and flows eastward for about 180 miles, widening from about 1.2 miles at its source to about 140 miles at its mouth. The river drains the second largest watershed basin of South America (the Amazon River is the largest), and is one of the largest basins in the world. It forms part of the border between Argentina and Uruguay, with the major ports and the densely populated capital cities of Buenos Aires and Montevideo located along its western and northern shores, respectively.

Ecologically speaking, the river is classified as a salt wedge estuary in which saltwater, being more dense than freshwater, enters the estuary in a layer below the freshwater, which floats on the surface. The freshwater comes principally from the Paraná River (one of the world’s longest rivers and La Plata’s main tributary) as well as from the Uruguay River and other smaller streams. Currents in the Río de la Plata are dominated by tides that reach well into the Uruguay and Paraná river tributaries. The tidal ranges in the Río de la Plata are small, but its great width allows for a tidal prism that dominates the flow regime despite the huge discharge received from the tributary rivers. The Río de la Plata’s ecological importance is profound because it carries high amounts of nutrients, as well as suspended particulate and dissolved organic matter to the adjacent shelf waters of the South Atlantic. In particular, the region associated with the turbidity front is an area of enhanced plankton concentration (refer to NASA image #1) and is the primary spawning and nursery area for many estuarine species that support the coastal fisheries of Argentina and Uruguay. Samborombón Bay, located to the south of the river mouth, provides habitat for the loggerhead sea turtle, green sea turtle, leatherback sea turtle, the rare La Plata dolphin, many species of fish, and migratory birds.

1. Caption: Image captured by MODIS sensor on NASA’s Terra satellite on April 12, 2007. Shows the Río de la Plata thick with sediment during a time of flooding on the lower Paraná River. The high flow is also pushing more sediment out into the hook-shaped Samborombón Bay on the south side of the estuary. Also visible is the lower Uruguay River, Buenos Aires, and Montevideo. Website: http://www.nasaimages.org/luna/servlet/detail/nasaNAS~10~10~73763~179229:Floods-in-Northern-Argentina 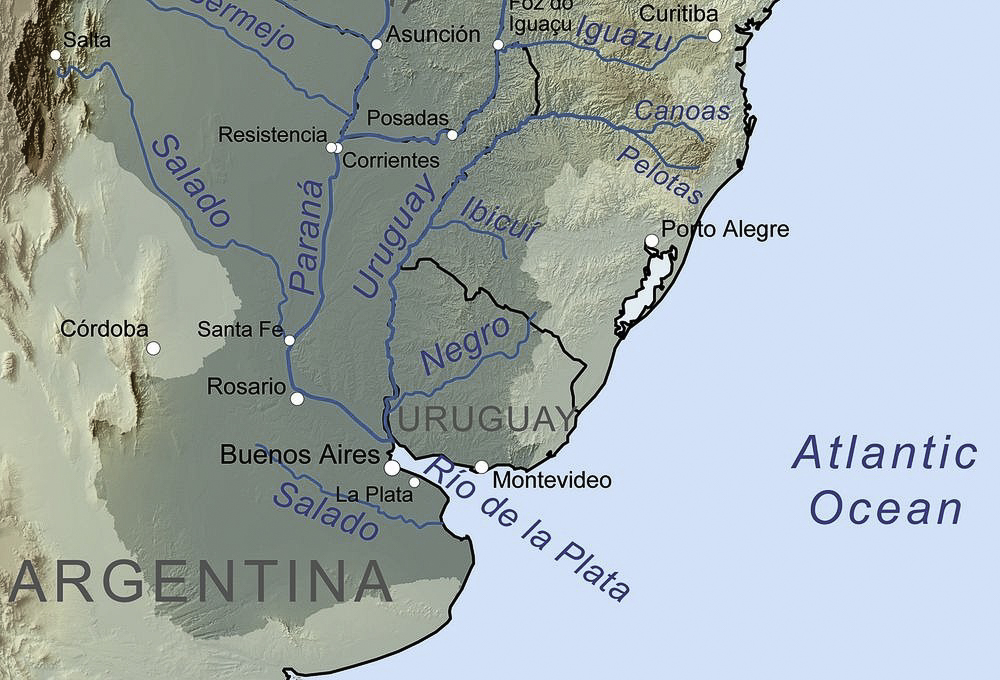 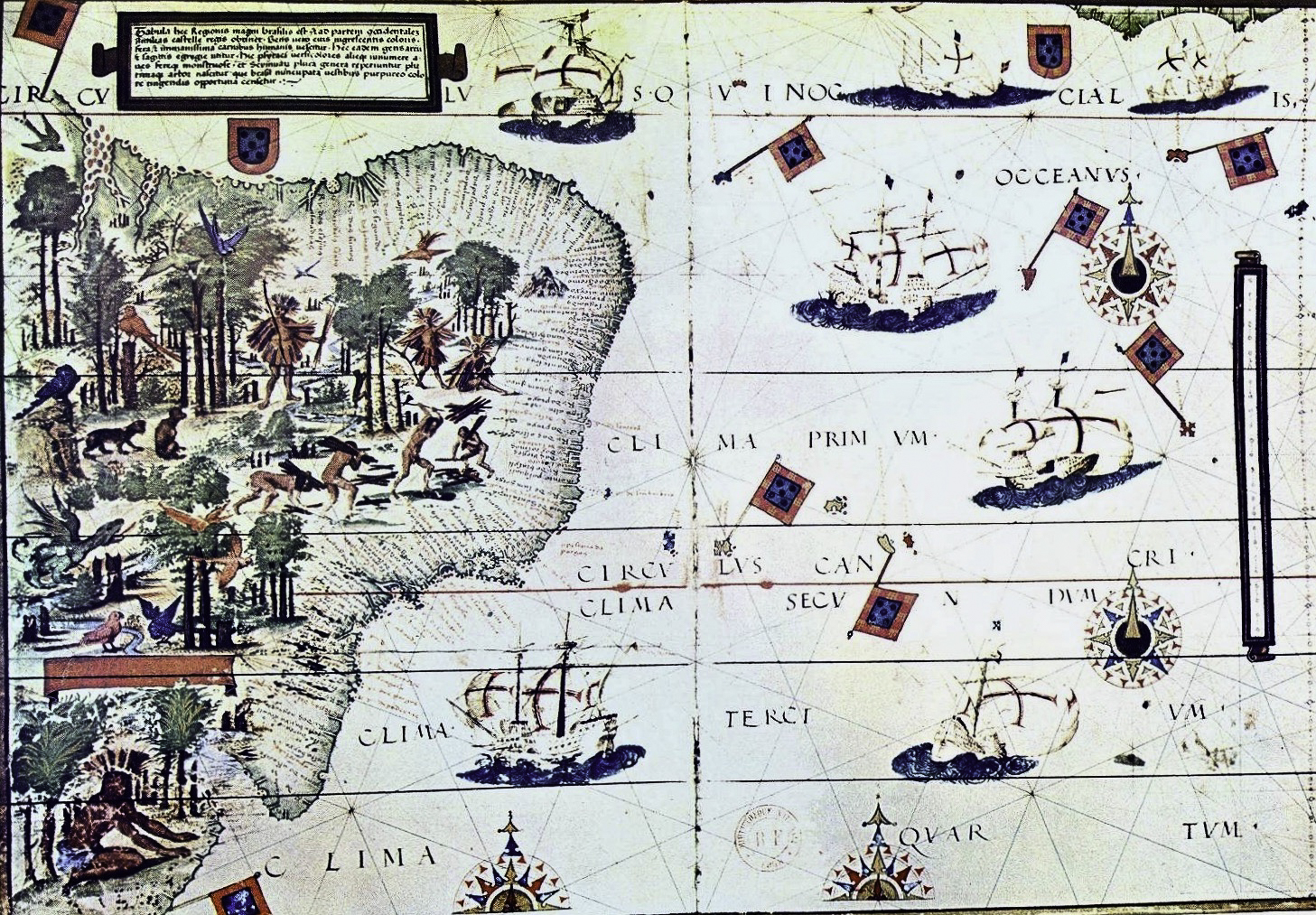 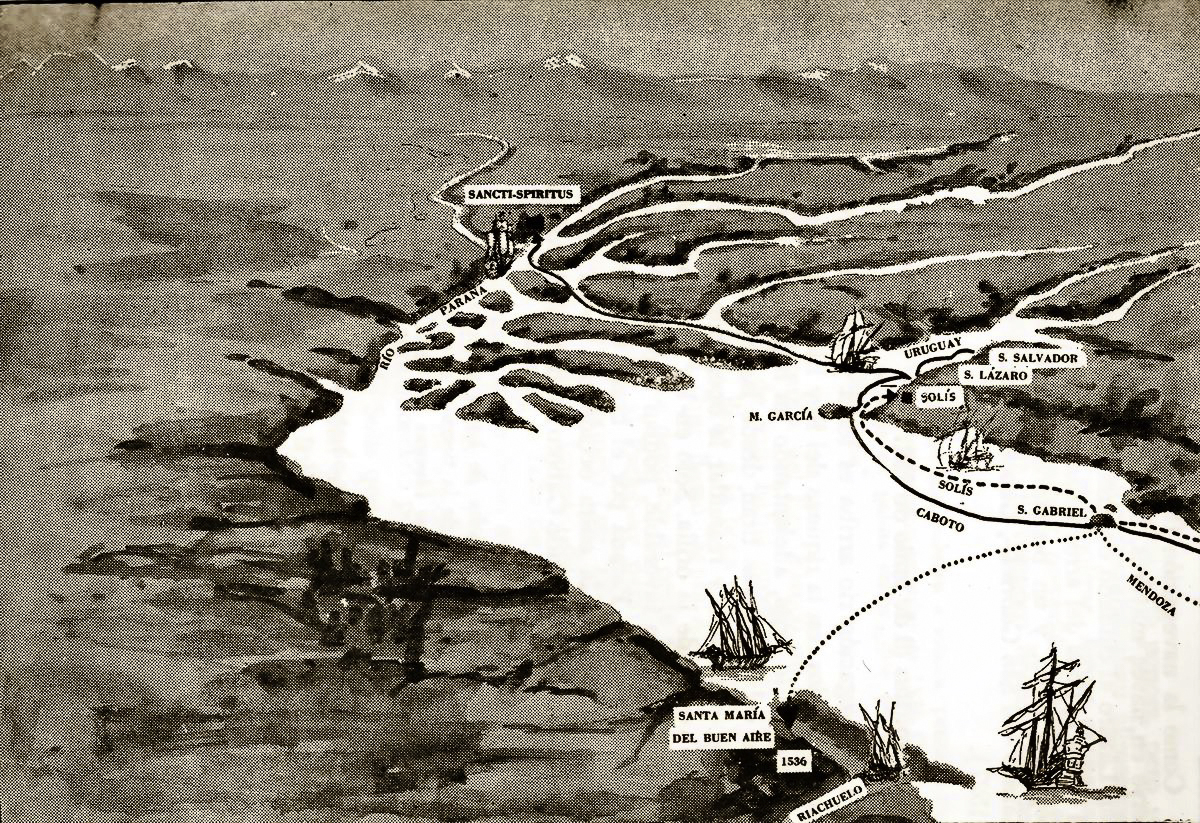 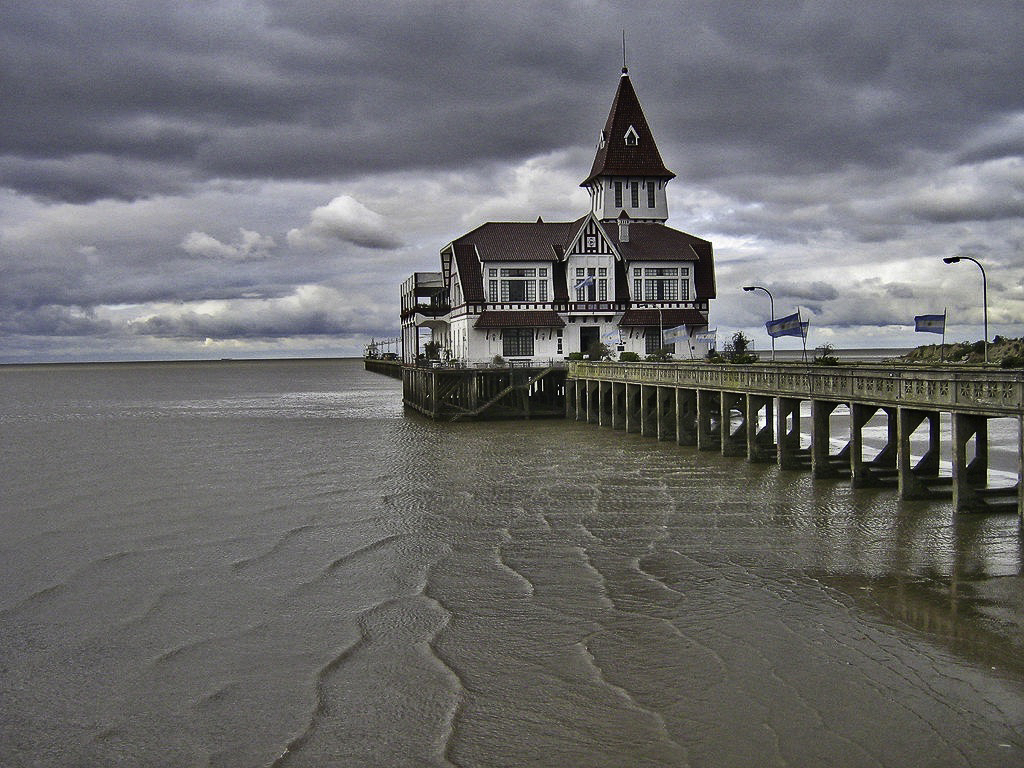