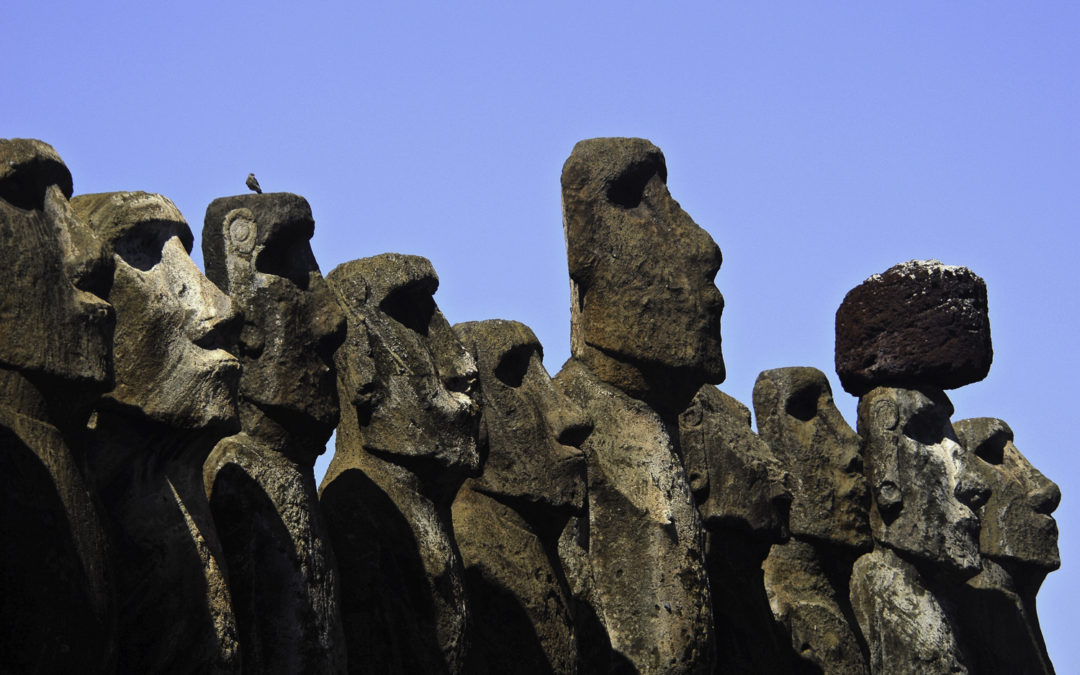 Looking down at tiny Easter Island, after a 5-hour jet flight from Chile across a sapphire-blue ocean, thoughts of Thor Heyerdahl’s pioneering expedition in 1947 aboard Kon-Tiki filled my mind. His extraordinary achievements have been documented in multiple books and an award-winning documentary. Like so many of my generation, the fact that Heyerdahl and his small crew sailed their hand-built raft more than 2,000 miles across the Pacific Ocean, from Chile to the Tuamotu Islands, inspired us to think beyond the confines of our own geography. When I finally saw the Kon-Tiki and the Ra at the museum in Oslo, I realized that the ongoing scientific criticism of Heyerdahl’s stubbornly-held belief that Rapa Nui’s first settlers came from South America misses the point entirely. What Heyerdahl’s multiple expeditions proved—his legacy to all of us—was that ancient mariners had seaworthy boats and the necessary navigation skills to cross oceans.

The oft-used guidebook phrase to describe Easter Island—“the most remote inhabitable island in the world”—doesn’t begin to capture the almost mystical essence of this island outpost. Rapa Nui, the indigenous name for Easter Island, forms the eastern geographic and cultural boundary of Polynesia. Much of the island is a designated World Heritage Site and Rapa Nui National Park was established to preserve and protect a unique cultural landscape of monumental sculpture and architecture built by a society of eastern Polynesian origin that remained isolated from external cultural influences for over a millennium. The date of the Polynesians’ arrival on the island and the reasons why their civilization would ultimately collapse are still being debated. What we do know is that hundreds of years ago, a small group of eastern Polynesians rowed their wooden, double-hulled outrigger canoes across vast stretches of open ocean, navigating by the stars and sea swells. When and why these people left their native land remains a mystery. What is clear, however, is that they made landfall on a small, uninhabited island with rolling hills and lush forests of native palm trees. Huge seabird colonies dotted the cliff-bound island. Having landed nearly 2,300 miles west of South America and 1,100 miles from the nearest island (Pitcairn), these Polynesian colonists were beginning life anew. They would eventually give their 63 square miles of island paradise the name Rapa Nui. On modern maps, the name Easter Island still prevails, honoring the Dutch explorer Roggeveen who “discovered” the island on Easter Sunday in 1722.

From the 10th to the 16th century, the Rapanuians constructed at least 900 megalithic statues (moai), more than 300 ceremonial platforms (ahu), which were built to support and elevate the colossal stone moai, and thousands of structures related to agriculture, funeral rites, housing and production, and other types of activities. It is thought that the moai represented a clan’s “most revered ancestors who were believed to bestow ‘mana’ on living leaders.” It is unclear why the Rapanuians turned to statue construction on such a massive scale. Their obsession with it may have ultimately contributed to their downfall as they depleted more and more of the palm forests for use in the process of moving the giant moai. Although their motivations for building these monumental sculptures remains shrouded in mystery, we do know that each moai was created from the soft volcanic tuff they quarried from the massive caldera of Rano Raraku—the perfect material for statue carving. Using harder volcanic rock implements, the carvers were able to first sketch out the moai’s outline in the rock wall and then systematically chip away at it until the moai was held in place by a thin “keel.” The moai carvers were master craftsmen who had risen through the ranks of a “carver’s guild.” To move the mammoth blocks of stone—on average 13 feet tall and 14 tons—to different ceremonial sites around the island, was an amazing logistical feat that required several days and perhaps a hundred or more men. The production of the statues was most likely done through conscripted labor with many rituals and ceremonies performed throughout the process.

The map and photographs below provide a visual sense of place and set the stage for the next chapters in the story! 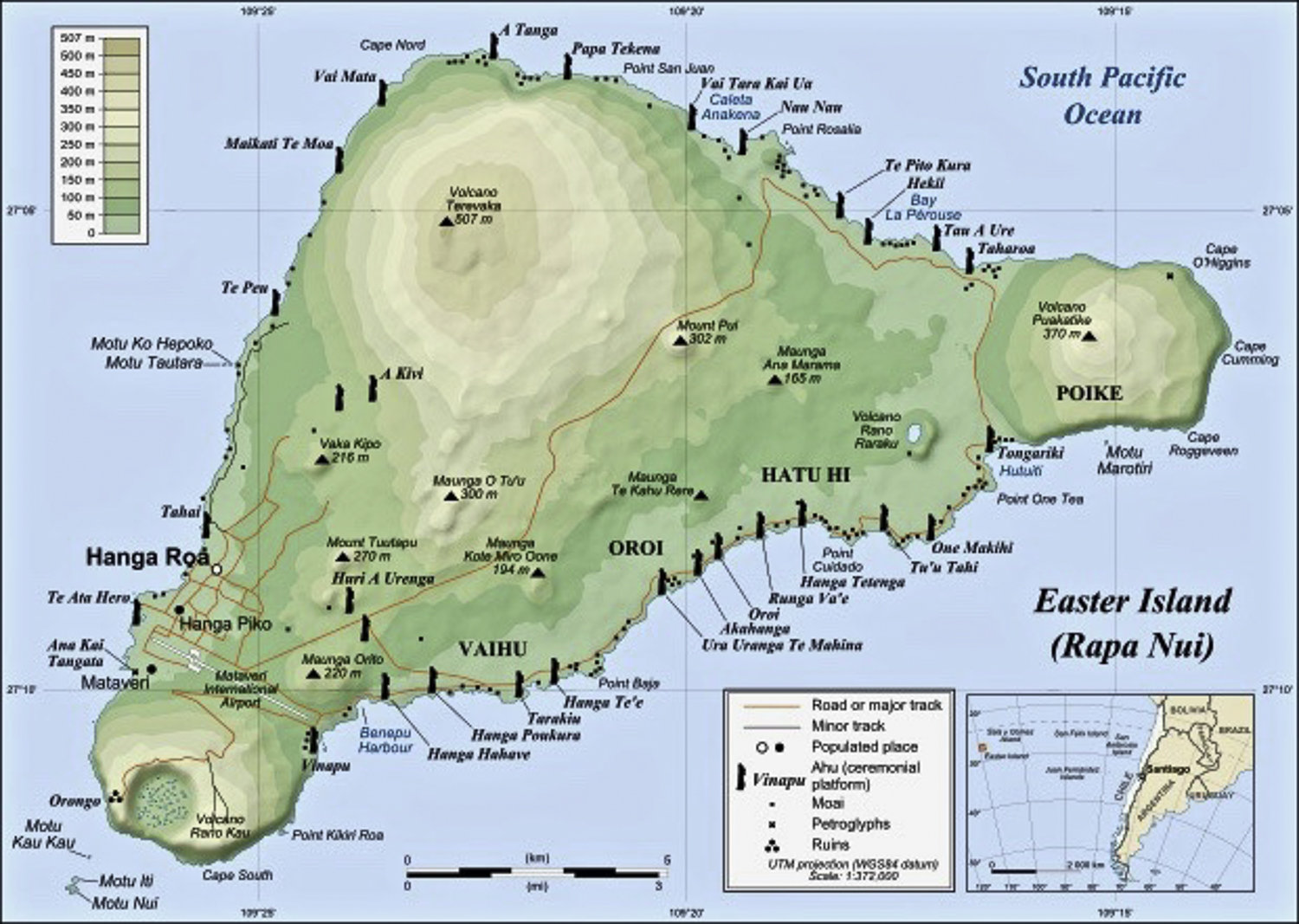 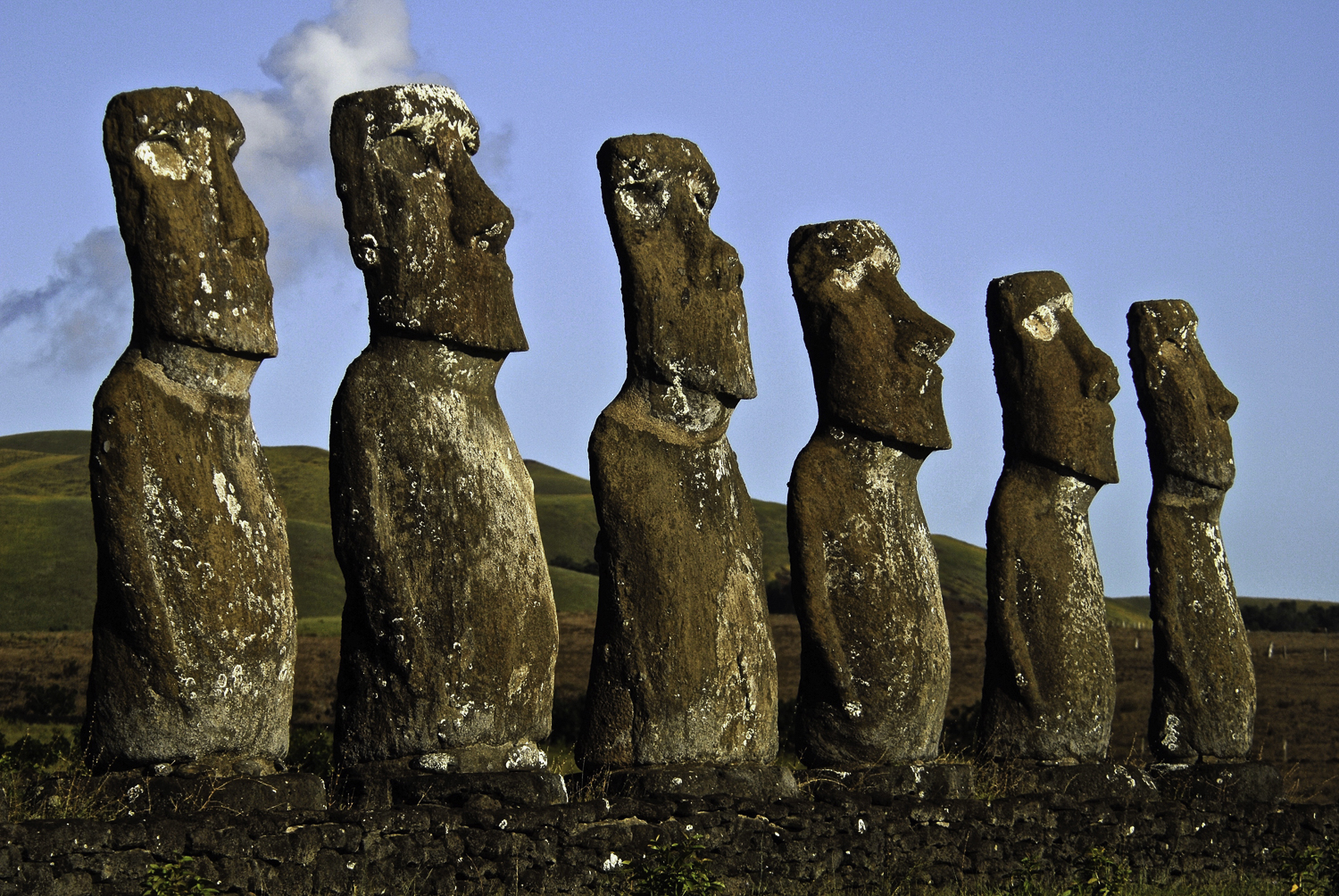 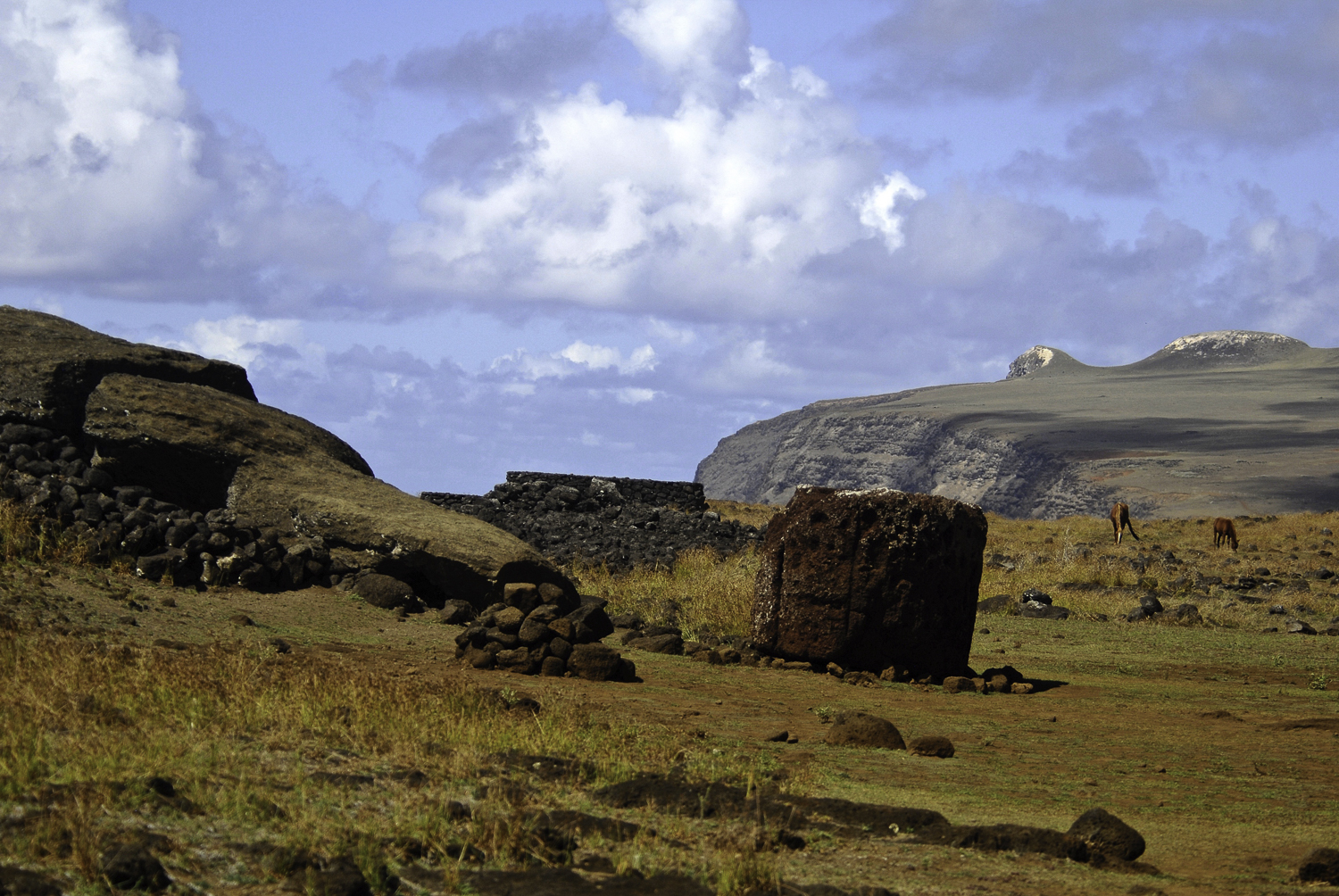 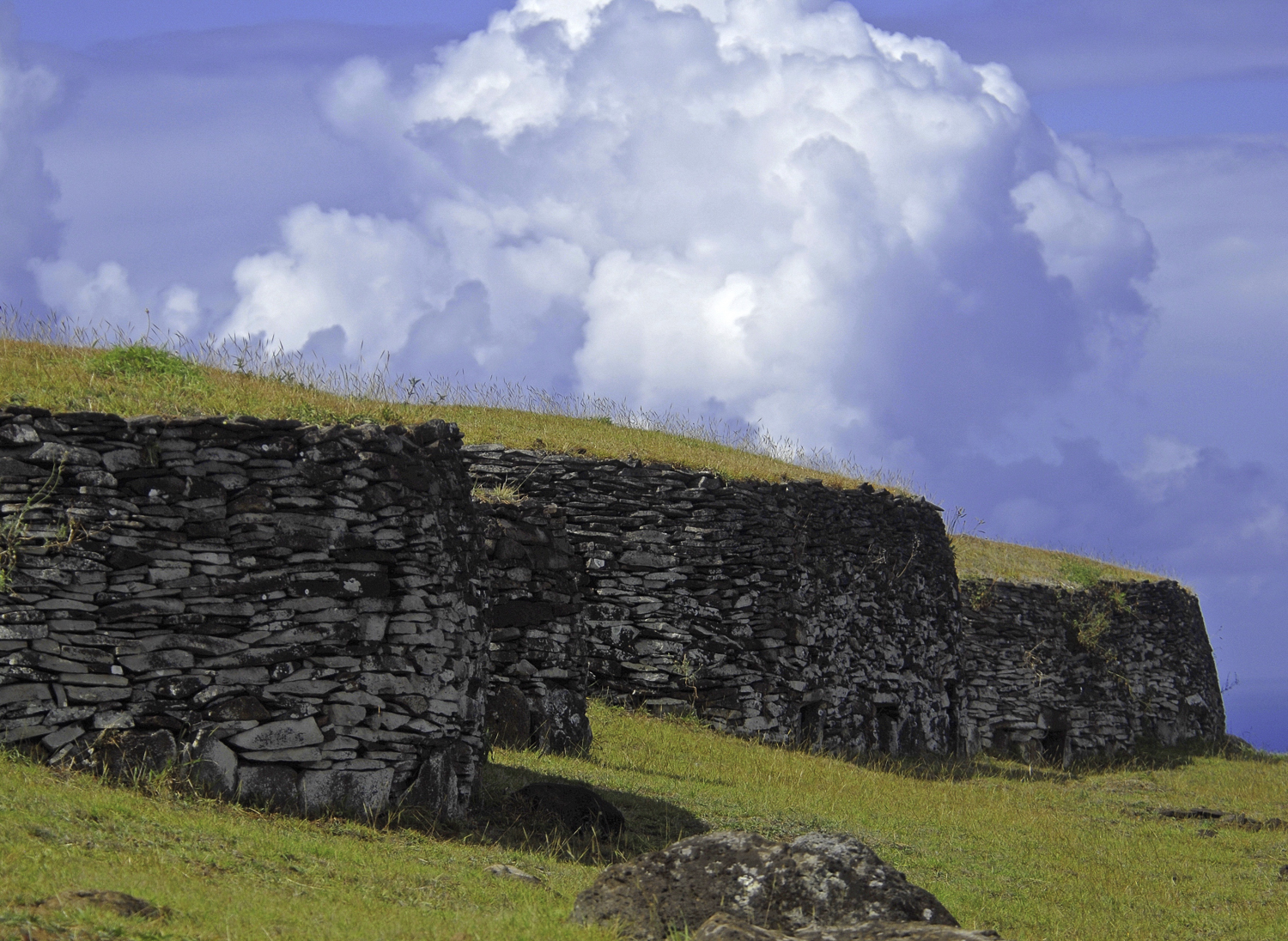