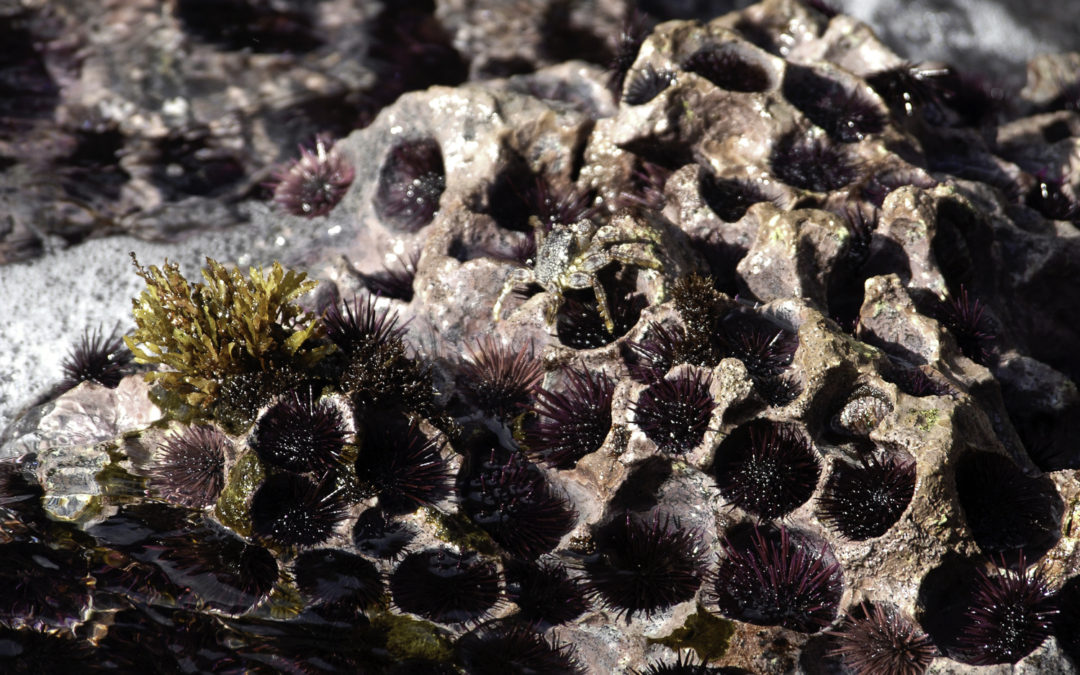 I benefitted from lessons learned growing up in a family of sharp-eyed observers of the natural world. One of the secrets to being a good naturalist, is to be a good observer—continually honing your ability to spot what is different or unusual in your field of view. Most importantly, you need to take the time to “really look” rather than simply scanning the scene. Binoculars certainly help to focus your attention, and I often show kids how to curl their hand into an instant monocular, or use both hands joined to provide a binocular-style view. The trick is to eliminate peripheral distractions and narrow your focus. Sitting on a high cliff photographing great frigatebirds swooping towards the surf zone far below me, I spotted a coral-hued patch of volcanic rock with dark purplish circles. Zooming my telephoto to the max, I saw that the purple “spots” were actually sea urchins—rock-boring urchins, to be precise, and a new species for me! Can you spot the perfectly camouflaged crab near the center of the 2nd photo?

Rock-boring sea urchins are found in tide pools, on exposed reef flats, and in rocks within the wave-swept surge zone. Their protection from wave impact is to either live under the protection of rocks or in cavities in the rock where they are sheltered form the full force of the waves. Research has shown that their sharp, hard spines and scraping jaws are used to enlarge natural cavities or holes in the rock, and the hole (or burrow) increases in size as the urchins grow. Urchins are vegetarians that, when able, come and go from their caverns to graze on algae. Even as the urchins grow bigger and dig deeper, their movable spines allow them to elbow their way in and out of their holes.The urchin grazes on seaweed film that grows on the rocks and on bits of seaweed that are washed into their rock shelters by the waves. Food trapped on the spines or in their urchin-sized rock den is transferred by long, sucker-tipped tube feet to the mouth on the underside.

Sea urchins belong to the Phylum Echinodermata, the “spiny-skinned” animals. Their relatives include the seastars, brittlestars, crinoids (featherstars) and sea cucumbers. Echinoderms all share basic similarities in their habits and body design: they are all marine; mostly bottom-dwelling (benthic); are unique in the animal kingdom in having a five-part body symmetry; and a water-vascular system of muscular internal canals that provides hydraulic power for the hollow, muscular tube feet that are used in movement, attachment, feeding, and often in gas exchange. Their large internal body cavity is also fluid filled, and circulating fluids carry essential gases and nutrients throughout the body. Echinoderms have an internal skeleton of calcite, a form of calcium carbonate (limestone). Skeletal plates, called ossicles, are developed to differing degrees in the different groups. In some echinoderms, like the sea urchins, extensions of the skeleton form the spines for which this group is named.

Looking past their thick, stubby, nonvenomous spines, sea urchins have a circular to oval shape. Their five-part symmetry is evident in the five zones of tube feet, alternating with five zones of spines, which run from the mouth on the urchin’s underside to the top of the body. In urchins, the skeletal ossicles are flattened plates, fused into a rigid test (skeleton). The spines sit on knobs on the test, attached by skin and muscles; the water-filled tube feet extend from inside the test out through holes in the plates. The many, muscular tube feet are used for attaching to the seafloor, for moving, defense and for food capture. The urchin’s mouth contains five sharp teeth fused together in a circle called Aristotle’s lantern. The name comes from Aristotle himself, who described sea urchin teeth (all species are similar) as looking like a five-sided lantern with the panes left out. 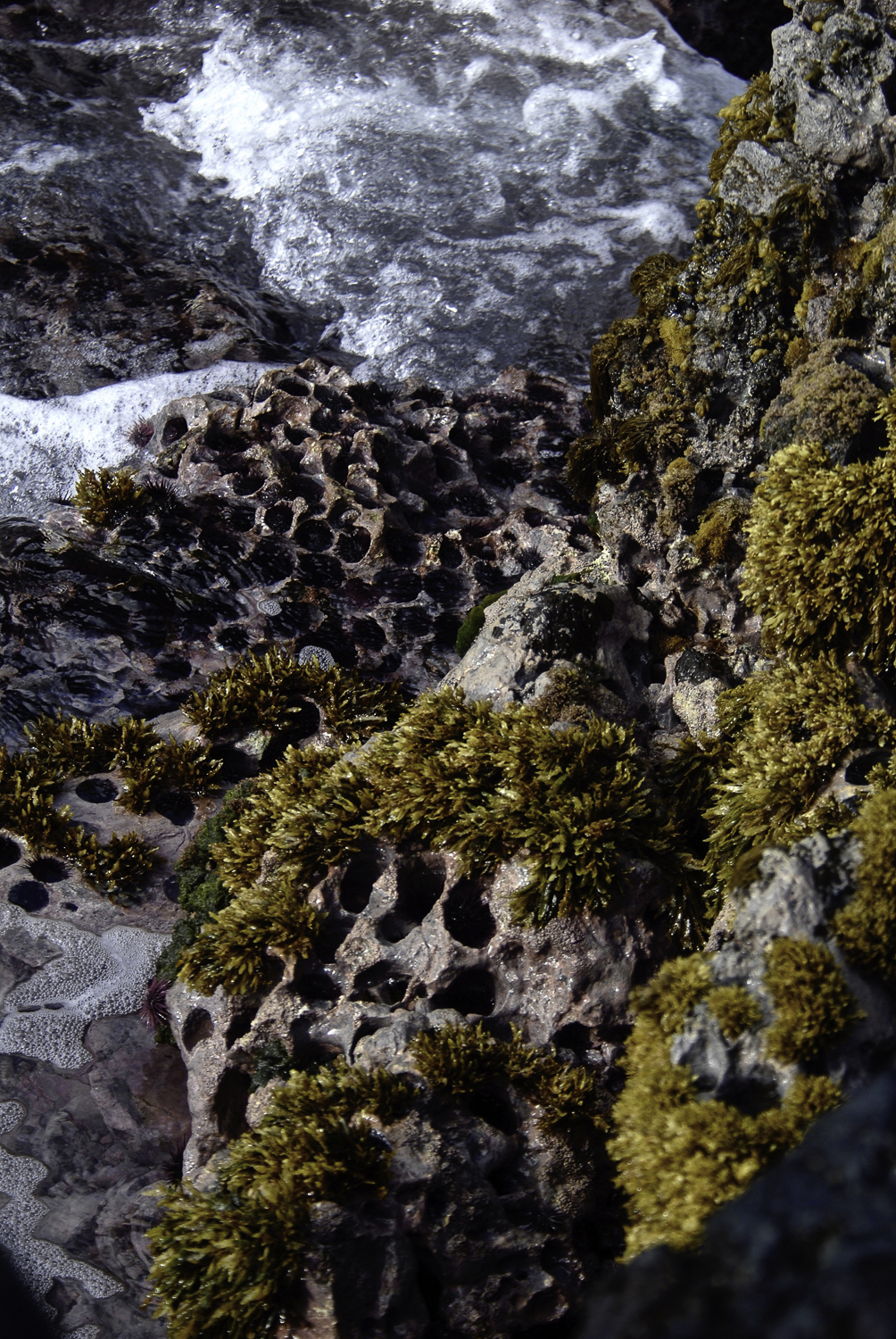