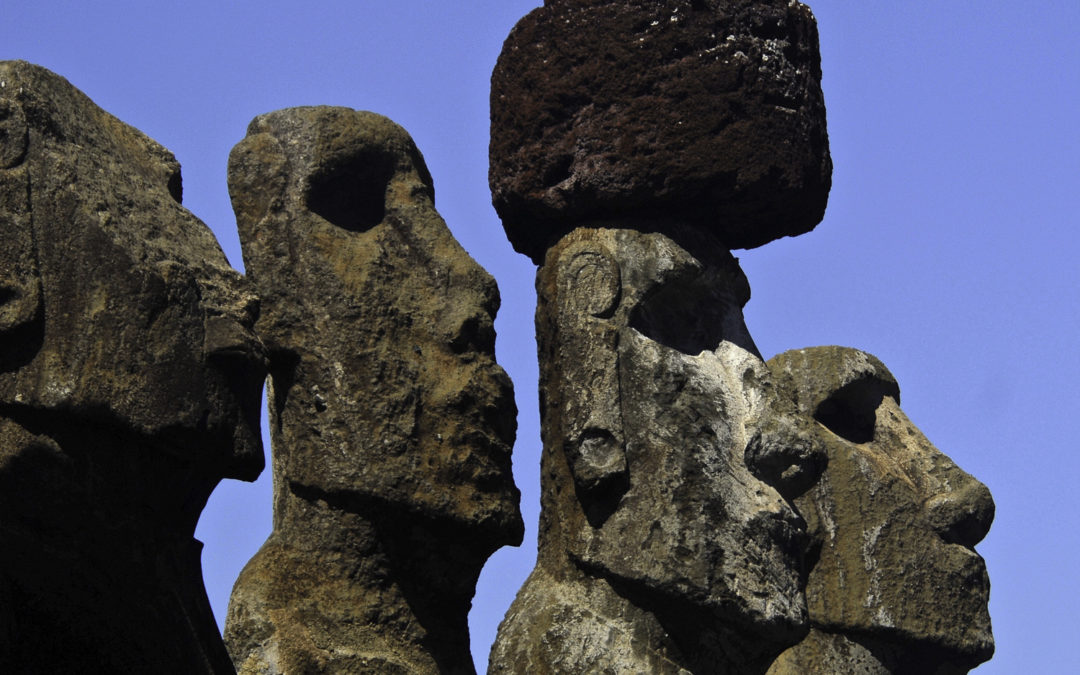 Ancient Polynesians lacked compasses, writing and metal tools, but they were masters of sailing canoe technology and their navigational skills were unsurpassed. By about A.D. 1200, the prehistoric Polynesian’s ascendency in overwater exploration had resulted in the dramatic spread of settlements to every habitable island in the vast watery triangle of ocean whose apexes are Hawaii, New Zealand and the remotest corner of all—Easter Island. Based on archeological evidence, most prehistoric Polynesian colonists designated a clan elder as expedition leader and were well prepared with what they needed for successful settlement—familiar crops and small livestock, such as chickens and pigs. According to Rapanuian oral histories, their leader was a chief named Hotu Matu’a (“the Great Parent”), who sailed to the island in one or two large canoes with his six sons, their mother, and extended family members. Multiple lines of archeological evidence support the sad reality that the Rapa Nui remained geographically and culturally isolated, with little to no known contact with the outside world from the time that Hotu Matu’s group colonized the island to the Dutchman Roggeveen’s arrival in 1722.

After nearly a hundred years of archeological and ethnographic research, modern DNA studies and oral histories, the powerful, yet tragic story of Rapa Nui’s rise and fall continues to unfold. The most reliable radiocarbon dates for colonization, based on research by Steadman, Cristino, and Vargas, center on A.D. 900. Accepting that the Rapa Nui thrived for hundreds of years, with clan settlements spread across the island, peak “high” population estimates of 15,000 or more people seem quite realistic. Archeological evidence for intensive agriculture (taro, bananas, sugar cane, sweet potatoes and other crops) exists across the island, including an abundance stone chicken houses, which would have been essential in helping support the ever-increasing population. The giant palm forests that the Rapanui depended on had gradually disappeared, with many cut down to build the post-settlement canoes used for fishing, increase the amount of land available for agriculture, burned as firewood, and the largest were set aside for transporting the giant moai statues across the island to ceremonial sites. With the loss in tree cover and associated soil erosion, nutrients leached out of the volcanic soil, reducing agricultural productivity.

After about 1625, with little wood left for daily use, people turned to burning grass, cane stalks, and other crop waste to fuel their cooking fires. As the human population steadily outpaced the island’s resource base, people began to starve, warfare broke out among the various clans, and cannibalism became more common during times of severe hunger and stress. By the time Roggenveen and the Dutch explorers—the first Europeans to reach this remote island—arrived on Easter Sunday in 1722, the land appeared quite barren. Roggeveen reported seeing no trees taller than 10 feet and those were widely scattered. For lack of suitable wood, fishing canoes appeared small and flimsy, and would never have provided a stable platform for harpooning porpoises or large tuna. The cliff-side seabird colonies that once provided meat and eggs had mostly disappeared, with some colonies moving to islets beyond the reach of hunters. Fish populations in near-shore waters had also plummeted.

New research by anthropologists Robert DiNapoli and Carl Lipo, in the Journal of Archaeological Science (2/6/2020), has forced revisions to the long-accepted timeline sequence for the events that ultimately transformed Rapa Nui. This research integrated a corrected sequence of radiocarbon dates for the stone platforms (ahu) and statues (moai), a re-interpretation of the architectural stratigraphy, multiple ethnohistoric accounts, and broad-scale statistical analysis of the data to quantifying the onset, rate, and end of monument construction as a means of testing the eco-societal collapse hypotheses proposed by scientists Jared Diamond and others.

The long-held belief that Rapanuian society had collapsed entirely by the time Europeans arrived on the island has been disproven. We now know that construction of the moai began soon after the Polynesian seafarers settled Rapa Nui, in the 13th century, and increased rapidly, sometime between the early-14th and mid-15th centuries, with a steady rate of construction that continued beyond European contact in 1722. The Dutch travelers noted that the monuments were upright and in use for rituals. The same was reported in 1770, when Spanish seafarers landed at Rapa Nui. When British explorer James Cook arrived in 1774, however, he and his crew described an island in apparent crisis, with many moai still standing while others had been toppled. The period between 1837 and 1864, has now been identified as the interval during which inter-clan conflicts toppled the remaining moai—defining a critical turning point in the rise and fall of Rapa Nui society.

When you factor in the devastating impacts associated with European, Peruvian, and Chilean intrusion and exploitation, which included infectious disease, murder, slavery, and missionary interference with cultural traditions, to the broad scale ecological destruction that engulfed the entire island, you begin to understand the compounding stresses that tipped the balance beyond recovery for the Rapa Nui people. When Chile annexed Easter Island in 1888, transforming much of it into a sheep ranch owned by a Chile-based Scottish company, the native population of Rapa Nui had dropped to around a hundred people. The Rapanuian’s political struggles with the Chilean government continued until 1966, when the Easter Islanders (as they were now known) finally became Chilean citizens. The simple fact that young Rapanuians are keeping their ancestral heritage alive through language, arts and cultural practices – is impressive.

Special Note: The story of Rapa Nui/Easter Island was masterfully researched and told by Jared Diamond in his book “Collapse: How Societies Choose to Fail or Succeed” (2005). I recommend this excellent book to anyone seeking to better understand the profound impacts of overpopulation, widespread and ongoing global ecosystem degradation, the potential toll of current and future pandemics, and the ramifications of the environmental situation we find ourselves in today. 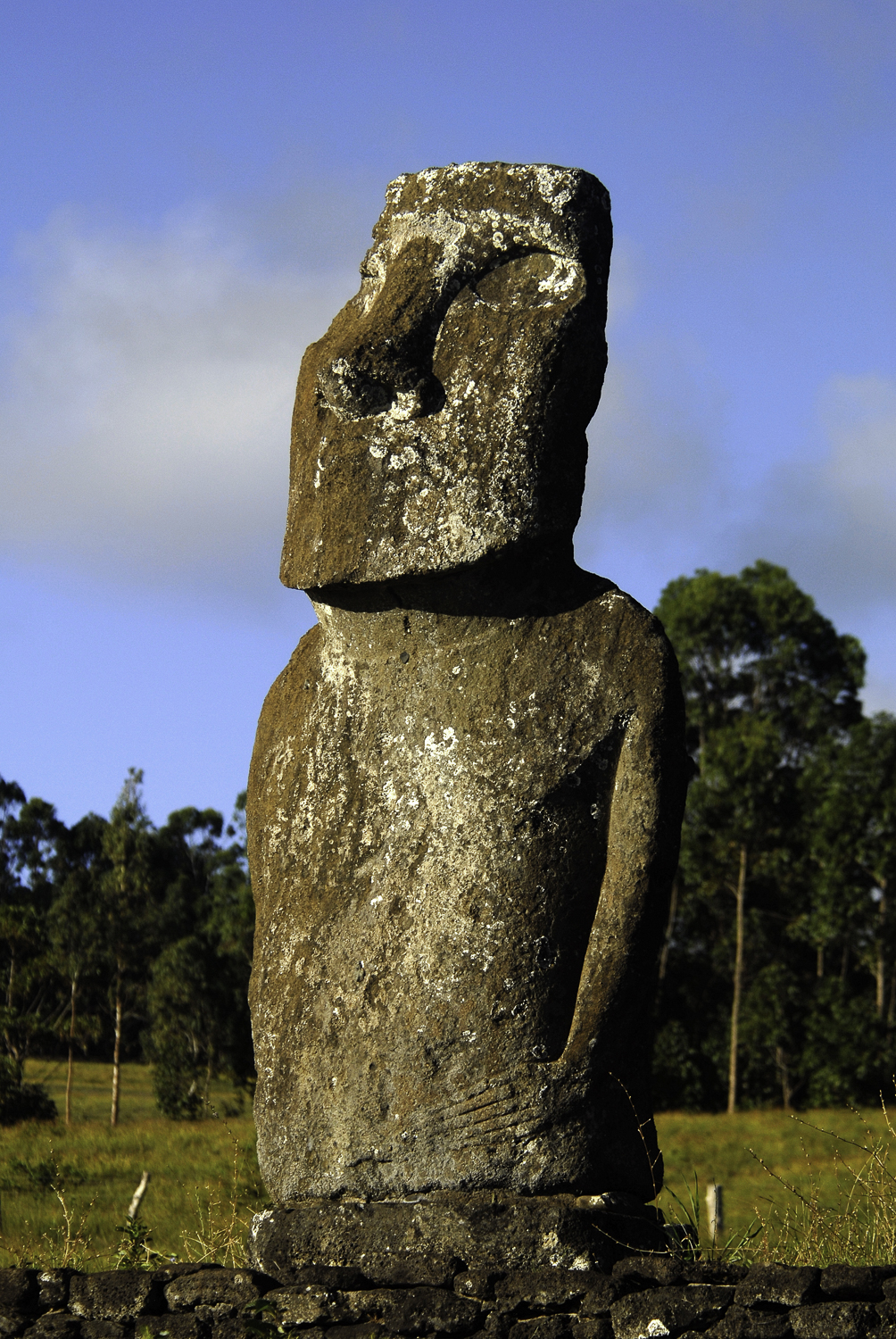