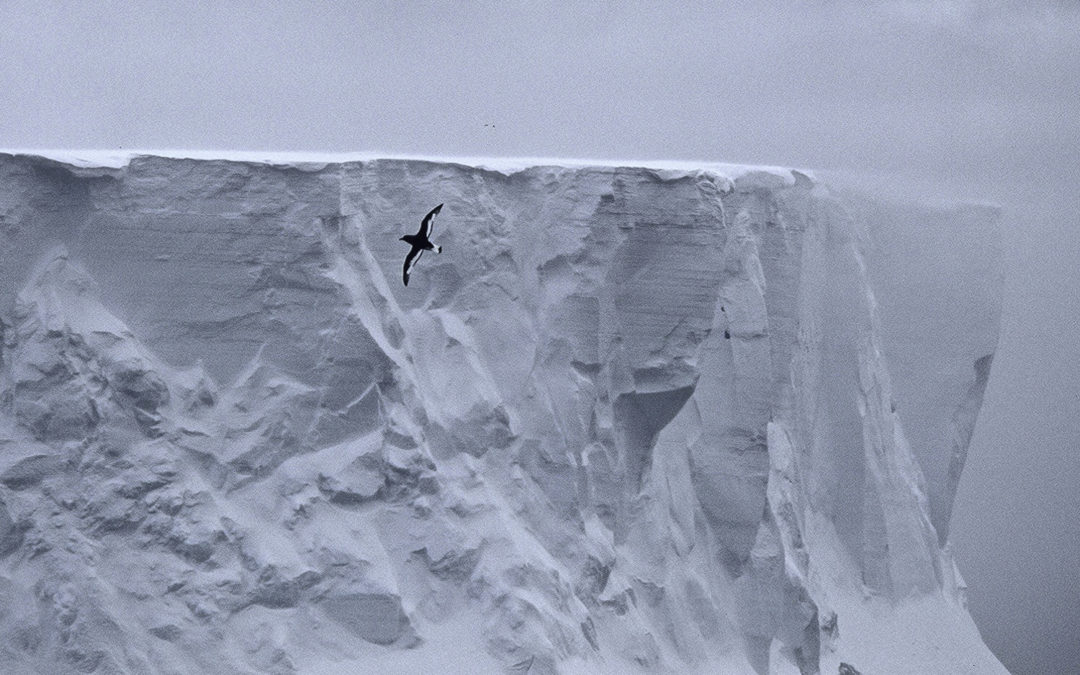 Cloud Ridge’s first trip to the Southern Polar Ocean in 2003 included the Antarctic Peninsula, South Georgia and the Falkland Islands. I knew that we would go back but that I would want to create itineraries that visited specific regions in greater depth. My personal fascination with both Antarctic and Arctic exploration history set the stage for our “Following in the Footsteps” series, which has focused for nearly two decades on expedition naturalists and explorers such as Darwin, Shackleton, Mawson, Scott, and Stefansson. Sir Edmund Hillary described the stunning scientific achievements of the Australian Antarctic Expedition (1911-1914), under Mawson’s leadership and against all odds, as “the greatest survival story in the history of exploration.” I highly recommend reading Mawson’s powerful book, “Home of the Blizzard: A Heroic Tale of Antarctic Exploration and Survival (1914),” or Peter Fitzsimons’ superb book “Mawson and the Ice Men of the Heroic Age: Scott, Shackleton and Amundsen.”

With this ePostcard, you’ll join us as we arrive in the East Antarctic. There is no way to describe the emotions that tumble through your mind as you see the East Antarctic Ice Sheet for the first time. Humbled and overwhelmed by the sheer magnificence of it all—yes, certainly! But it is so much more than that. The East Antarctic Ice Sheet (EAIS) is one of two large ice sheets in Antarctica, and the largest on Earth. The EAIS is considerably larger in area and mass than the West Antarctic Ice Sheet (WAIS), and is separated from it by the Transantarctic Mountains. The EAIS is the driest, windiest, and coldest place on Earth, with temperatures reported down to nearly -148°F (-100°C). In the words of Sir Douglas Mawson himself, the “Home of the Blizzard”.

(1 – photo above) A break in the two-day wind and snowstorm that had held us offshore for two days gave us the visual gift of an Antarctic petrel as it wheeled cross the face of the ice shelf. Never straying far from the ice, these beautiful petrels are sheer grace on the wing. As you will remember from ePostcard #34, our Russian captain had run a parallel GPS line (back and forth) well off the coast, night and day, until our expedition leader determined that it might be “safe” enough to attempt a Zodiac landing ashore. Our destination was the historic Mawson’s Hut, where the Australian Historical Society restoration team was awaiting their holiday mail and several cases of beer.

(2 ) Photo courtesy of NASA. In this aerial photograph of the East Antarctic coastline (probably near the Cook Ice Shelf?), the icebergs are highlighted by the sunlight, and the open ocean appears black. Can you spot the penguins on the ice?

(3) This map shows the location of the Australian Antarctic Expedition’s Mawson Hut, which the team built and served as the base for the 3-pronged exploration effort.

(4) We arrive at the edge of East Antarctic Ice Sheet (D’Urville Sea), remaining about a quarter of a mile from the face of the Mertz Glacier and nearing our destination at Commonwealth Bay. This is all snow and ice, and there is no bedrock in this image.

(5) This was our first look at Mawson’s Hut buried in snow at Commonwealth Bay (below) after edging along the Mertz Glacier gauging the katabatic winds. The decision was made that we would try to land. As a leader, I was in the bow of the first Zodiac to attempt a landing. We would ride the fast-moving wave to the wall of snow, which the Australians had prepped for our arrival by cutting steps that we would climb with the aid of ropes strung from two ice axes. Unfortunately, perched in the bow (the “active” hot seat) of the inflatable, I ended up breaking a couple ribs when the Zodiac flew off a giant wave crest and dropped into the trough. Determined but excited, we landed successfully but were forced to Zodiac back to our ship one hour after landing when another blizzard slammed us.

(6 & 7) Our weather the next day was unbelievable —a sunny, cloudless, and wind-free day! We followed the Adélie penguins to the hut because they seemed to know the way! 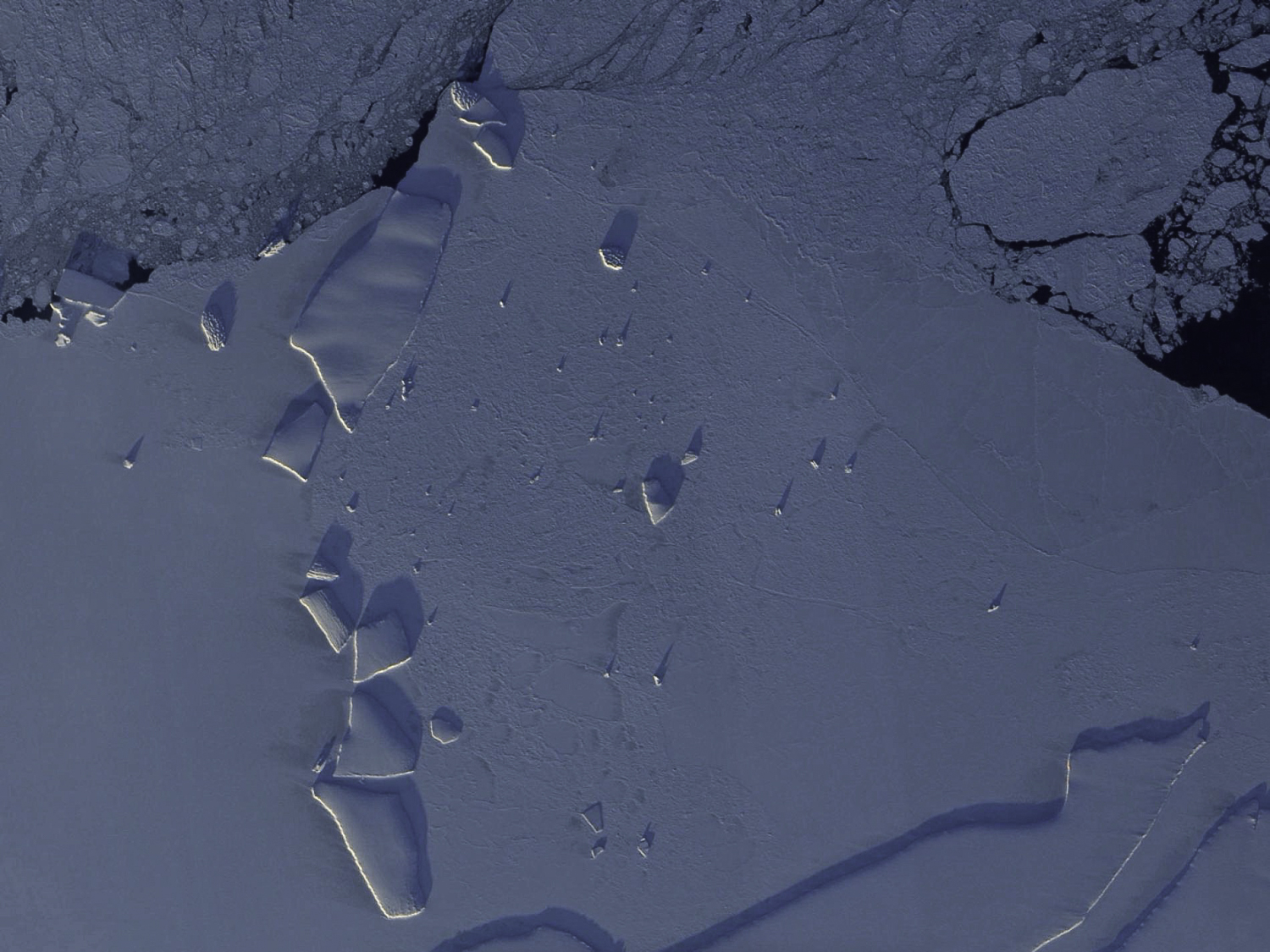 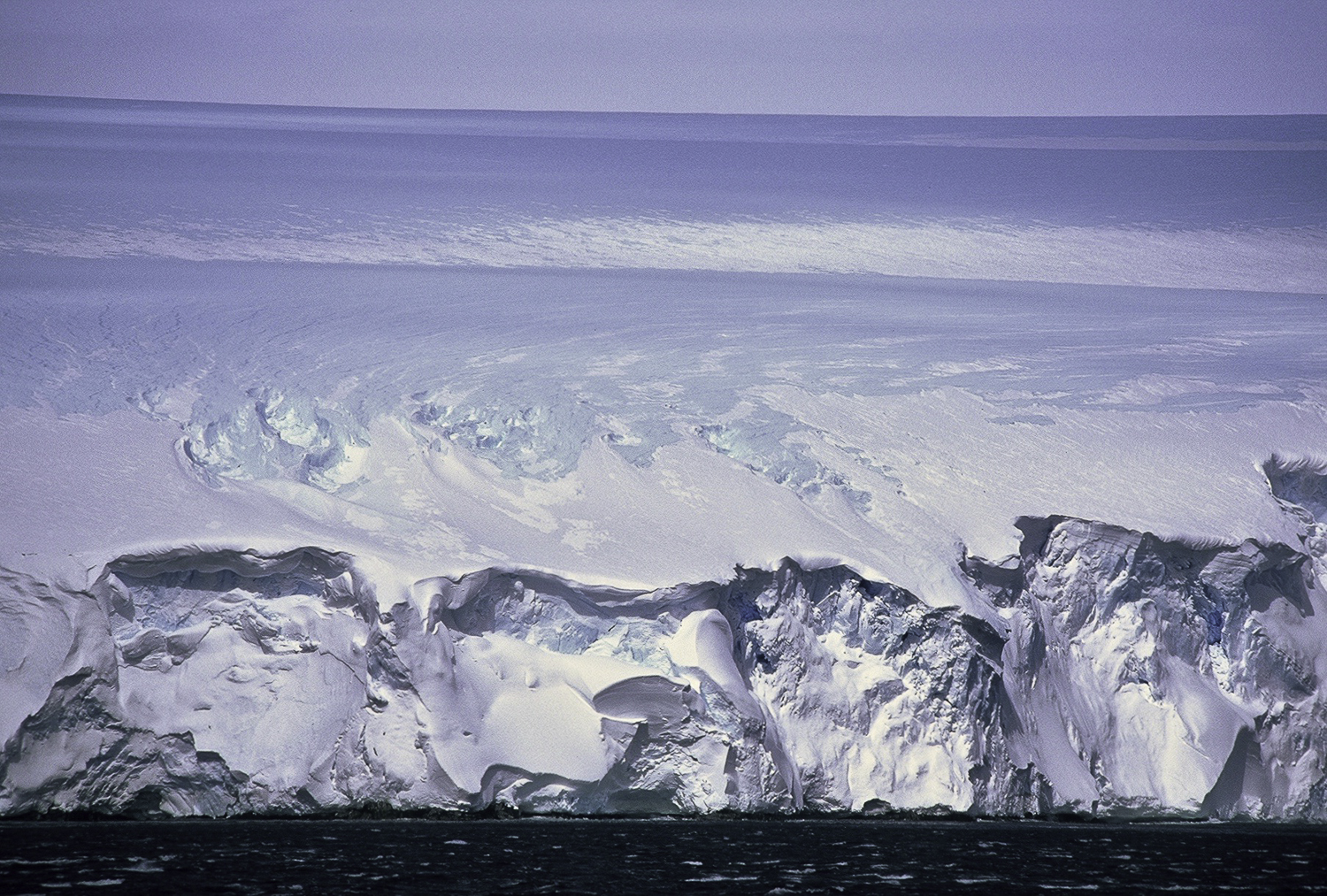 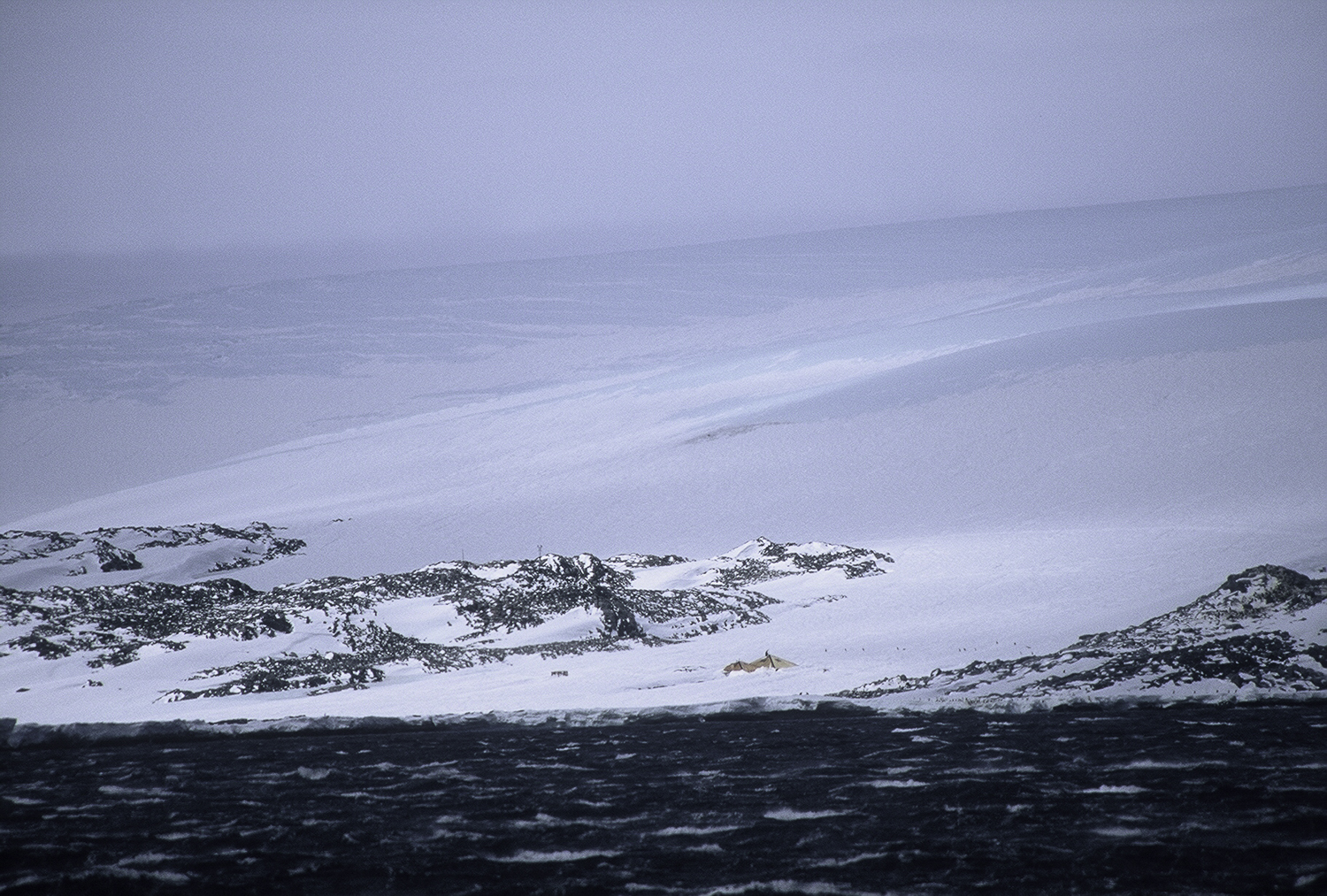 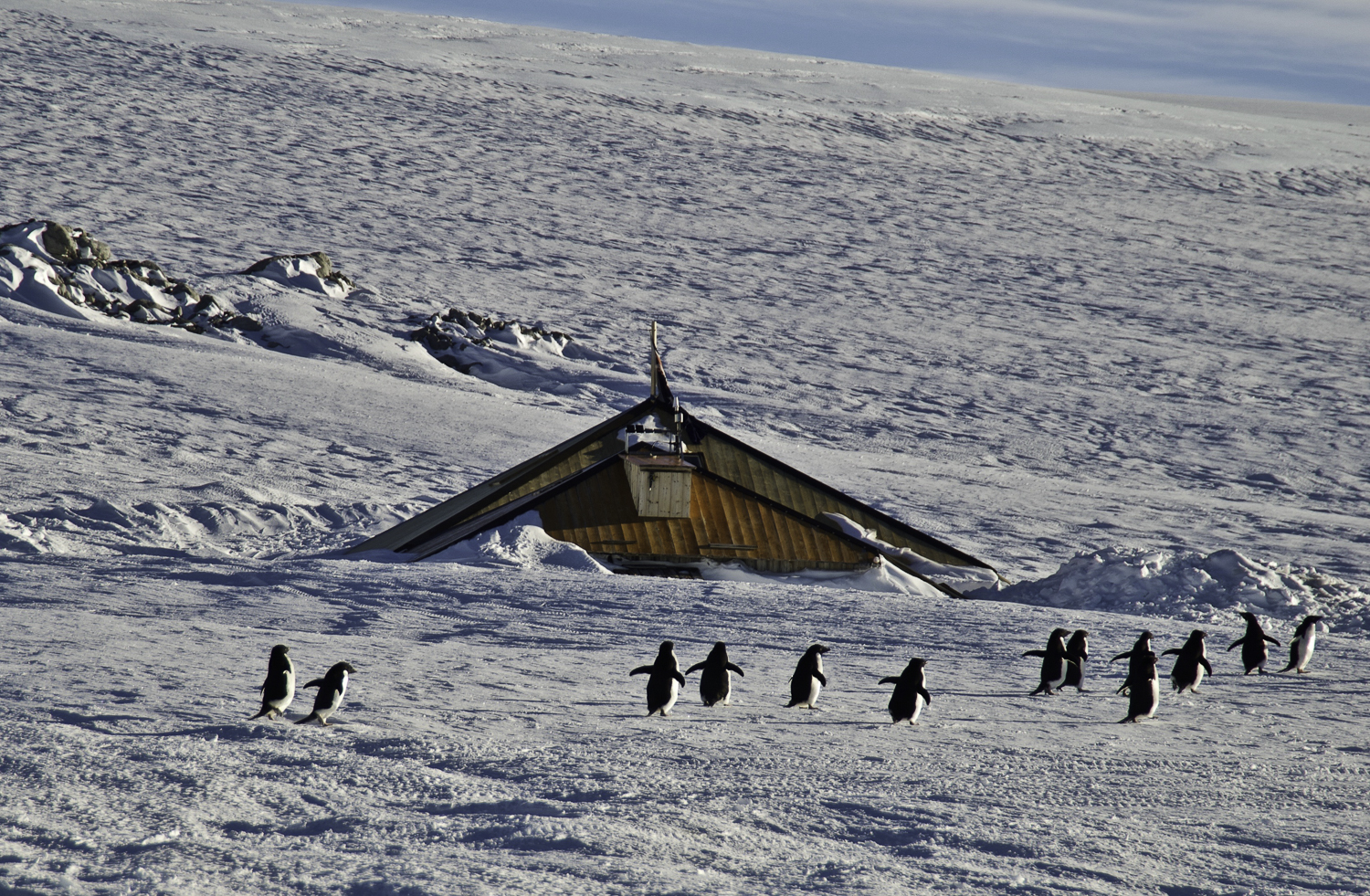 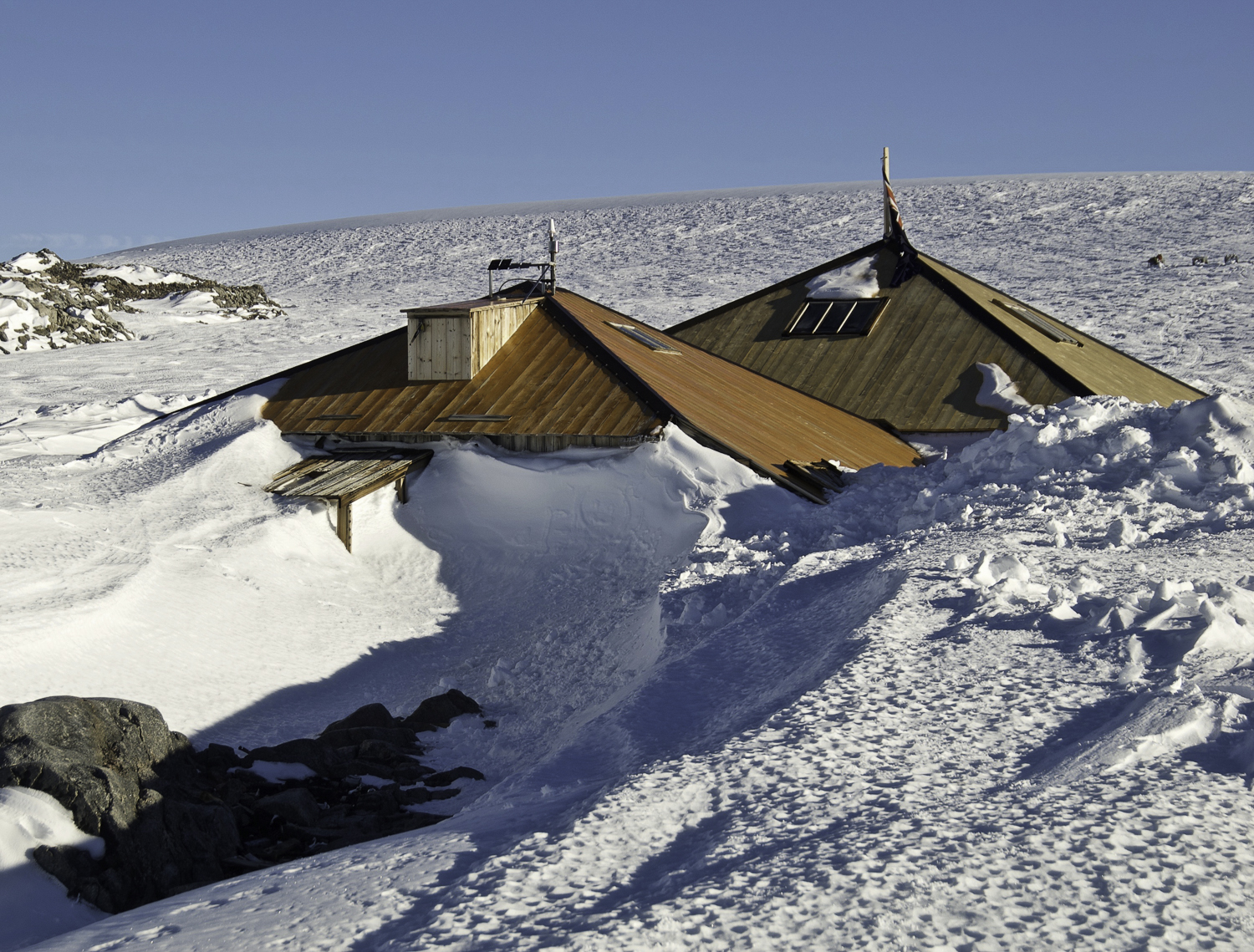