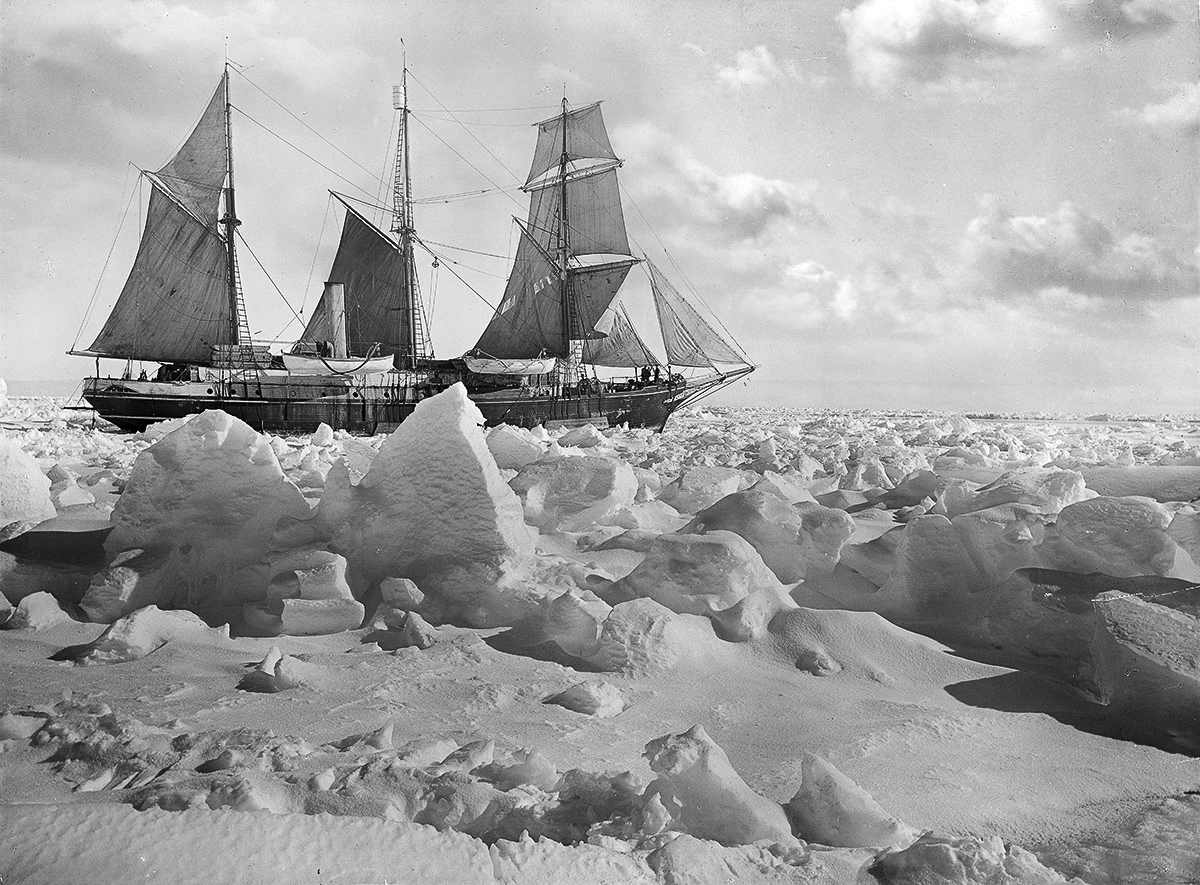 Photo #1, above: Honoring Endurance! This photo was taken by Frank Hurley when the crew put the sails up trying one last time to free Endurance from the sea ice of the Weddell Sea. As we know, this and other attempts failed, and realizing the ship wasn’t moving Hurley went onto the ice to take this photograph to record the moment.

“Scott for scientific method, Amundsen for speed and efficiency but when disaster strikes and all hope is gone, get down on your knees and pray for Shackleton.” 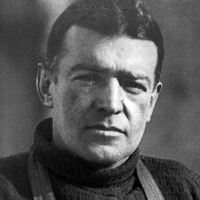 In 1920, tired of the lecture circuit, restless and not in particularly good health, Ernest Shackleton announced a yearning to return to the polar regions—whether to the Antarctic or the Arctic seemed not to matter. The pull to sail southwards again could not be denied. The main motivation for the new expedition was to collect scientific data in Antarctic and sub-Antarctic areas, and it would be entirely funded by a wealthy businessman and longtime friend of Shackleton’s. In doing so they would circumnavigate the Antarctic continent and sail along previously unvisited stretches of the Antarctic. Shackleton wanted to explore many of the little known islands of the Southern Ocean and confirm or disprove the reports of land. The scientific work was to include taking meteorological examinations, magnetic observations, zoological studies, geological surveys, hydrographical and oceanographical work as well as the charting of little-known islands.

More animated than he had been for several years, Shackleton sent word to the old Endurance crew that he was headed south again. The enthusiastic responses he received from Worsley to return as skipper, his best friend Macklin as surgeon, Wild and McIlroy coming from their cotton farm in southern Africa, Green returning as cook, Hussey bringing his banjo, as well as McLeod and Kerr signing on buoyed his spirits. A competition was held through the Daily Mail to find a boy scout to work as the ship’s boy on the journey; the competition was so fierce that Shackleton would choose two boys to accompany them.

They set sail on 17 September 1921 aboard the Quest. On the journey southwards they had numerous engine problems, which forced them to lose a month as repairs were made in Rio de Janeiro. Apparently, Shackleton suffered a mild heart attack there but would not let Macklin, his friend and the ships doctor, examine him. Clearly sensing more than he let on, Shackleton changed their plans to sail directly to South Georgia. After a stormy passage, the Quest arrived at Grytviken on South Georgia on January 4, 1922. Shackleton looked through binoculars towards the coast where he and his two companions had traversed the inhospitable terrain in 1916 to raise the alarm concerning the fate of his crew from the Endurance.
“The Boss says … quite frankly that he doesn’t know what he will do after S. Georgia,” Dr. Macklin had written, only five days earlier.

With beautiful weather at last, the men went ashore and visited a few of the Norwegian whalers they had known in 1916. The men then went walking in the hills and then sat down to watch the seabirds at their leisure. They threw sticks for Query, the ship’s pet dog, in the same spot where they had exercised the sled dogs during their month layover at Grytviken. They had a pleasant dinner aboard and good conversation, and afterwards Shackleton joked that, “Tomorrow we’ll keep Christmas.” At 2am on January 5, 1922 Shackleton called out for Macklin, asking for sleeping pills and complaining that he was in pain and that the aspirin was not working. Macklin warned him that he needed to take things more easy and stop working so hard. Shackleton replied with the words “You are always wanting me to give up something. What do you want me to give up now?” These were Shackleton’s last words. Shortly afterwards he suffered a massive heart attack and died. He was only 47. Sadly, it fell upon Macklin to conduct the autopsy, which showed the cause of death as “atheroma of the coronary arteries,” and according to Macklin, “a long-standing condition exacerbated by debilitating damage to his heart,” resulting from the ‘Boss’ giving everything he could to the challenges he’d faced as an expedition leader.

At first Shackleton’s body was sent to Monte Video to be returned to England. However, when Lady Shackleton heard the news of her husband’s death she asked that his body be returned to South Georgia where she thought he would have wanted to be. He was buried in the whalers’ graveyard on South Georgia at Grytviken, his grave marked by a headstone of Scottish granite and overlooking the stormy seas. The gravesite is visited regularly by scientists and tourists to this day. The command of the expedition passed on to Wild. In Shackleton’s honor, they headed southwards through the Weddell Sea to Elephant and Clarence Islands and then back up to South Georgia where they erected a cairn in Shackleton’s memory and paid homage at his grave. From there the men went on to Tristan da Cunha, meeting with the islanders, giving them supplies and the ships doctor providing medical assistance. The expedition continued according to Shackleton’s plan and arrived back in British waters in September 1922, bringing massive amounts of scientific data and valuable deep-sea soundings. Scientifically the expedition was a tremendous success. The ‘Boss” would have been proud! 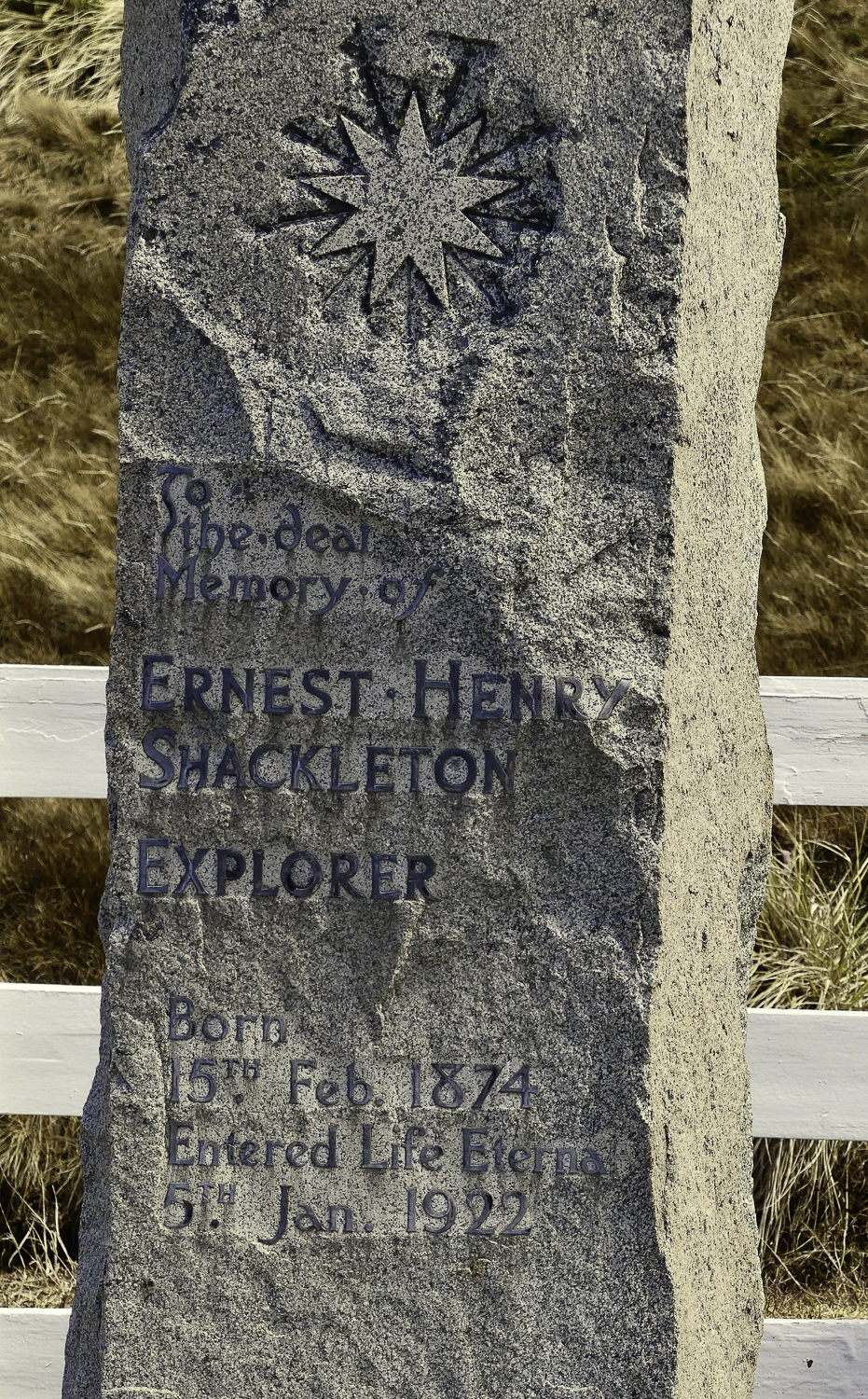 We toasted his life with a dram of fine single-malt Scotch—the same recipe created especially for the Endurance expedition.